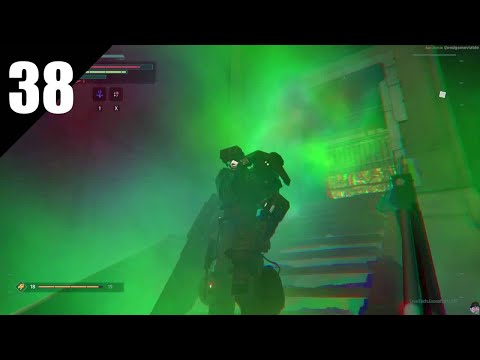 Previously: The Surge, Research and Development

The Surge Pt 33 - Please Welcome Tobias Greene. After defeating the Black Cerberus, Warren finally gains access to the security rig needed to proceed into the Executive Forum, a posh set of offices for the CREO leadership team, and the place where the vaguely Oceanic-sounding hologram lady has been telling us to go. There are security guards and checkpoints everywhere on the way to the next Ops Medbay. Meanwhile, Don Hackett reports that Jonah Guttenberg is suddenly “unavailable,” so Tobias Greene is stepping in as the face of CREO with vague and ominous promises. Recorded 5/16/2021. The Surge Pt 34 - Backtracking. We take some time to backtrack and find a robot leg for Maddy, and to look for security doors to open. We only find one before giving up and returning to the task at hand. Recorded 5/16/2021. The Surge Pt 35 - The Last Time I’ll Hear Your Name. We spend a lot of time in dark service tunnels, but then we finally find the studio where Don Hackett’s been broadcasting from, the voice we’ve been hearing from video screens from the very beginning. Unfortunately it’s not a happy ending for him, as he questions his role in the zombie disaster at CREO. One of the most impactful story moments, since Don Hackett is the only character we (sort of) get to know in the entire game, through his near-constant media presence on every passing video monitor. Recorded 5/16/2021. The Surge Pt 36 - The Board Room. Warren finally makes it past all the security to the Board Room, where we find… the vaguely Oceanic-sounding hologram lady. She’s still a hologram for some reason. There’s tons of story implications here that are too complicated for a summary. The board is there too, but they’re all dead. Their last act was to approve the launch of Project Utopia with a payload of nanites, which will basically destroy the world, or something like that. The point is we’re supposed to stop that. Or possibly ensure it launches, if you’re pro-Project Utopia and anti-Project Resolve, which is the main story decision to make in the game. Recorded 5/16/2021. The Surge Pt 37 - Nucleus. And so we arrive in The Nucleus, the final zone of the game, and by far the most annoying. It begins with our first encounter with a Crysalis Trooper, a creepy dancing whirling dervish of death made from nanites that seem to warp the very air, a product of CREO’s mad science experiments gone awry. And that’s just the start of the epic journey up a single flight of stairs to level 2. Among the maze of stairs and passages in level 2, we have another brief encounter with Maddy, who’s run away to play hide and seek. Recorded 5/16/2021. The Surge Pt 38 - Nitrogen Pump Station. We head down into the Nitrogen Pump Station from level 2, where long winding tunnels are confusing and frustrating and full of nanite-enhanced zombies. These nanites are evolving their own sentience and taking over the world, or something silly like that. We’re probably supposed to stop that. Recorded 5/16/2021. The Surge Pt 39 - Utopia Preparation Classified. Much like we were once lost in Production Central B, we find ourselves lost and uncertain where to go in and around the depths of the Nitrogen Pump Station in the Nucleus, getting killed repeatedly by Chrysalis blobs in the Utopia Preparation Classified room. In a desperate attempt to find a path forward, Warren pushes a button to disable the Project Utopia rocket payload (even though I didn’t want to). It didn’t help. Finally we stumble upon a side tunnel which leads to the Escape Assembly Area and Refueling. Heavily edited to remove a lot of my frustrated whining while lost and confused. Recorded 5/17/2021. The Surge Pt 40 - Rapid Launch Control. The excitement of finding a new area is short-lived, as we soon find ourselves lost and confused yet again, devoid of any paths forward. We’re also very confused by a new enemy: The apparently unkillable Chrysalis Blob. Somehow we end up on a train back to Central Production B, even more lost than ever. Eventually a wiki helps us find the obscure hole we’re supposed to jump into, and we’re finally able to move the Ops elevator up to Rapid Launch Control on Level 3, where even more confusing passages and frustrating fights await us. Heavily edited to remove a lot of my frustrated whining while lost and confused. Recorded 5/18/2021. The Surge Pt 41 - Maddy Found. We’re still lost and confused and have no idea where to go or what to do in this accursed Nucleus, but we figured out how to “overcharge” the Chrysalis Blobs to kill them. We find Maddy, but it isn’t a happy reunion… although we get a rare achievement out of it. Mostly a lot of wandering around trying to figure out what to do, most of which was edited out because there was a lot of it. Recorded 5/19/2021. The Surge Pt 42 - Rogue Process, Credits. A hunch tells us to try moving the Ops elevator all the way back down to level 1 again, and miraculously (ie. inexplicably) we find a previously-blocked path open before us. Warren’s first day on the job comes to an end with another boss fight against the Rogue Process, a nanite-infested sentient machine consciousness, or something like that. Thankfully it’s more straightforward than the nightmarish slog through the confusing Nexus was. The Project Resolve rocket launches, and one can only hope Warren receives a satisfactory employee review from his managers. (I would give the Nucleus zone a very large red unsatisfactory review. What a horrible experience that last zone was.) Recorded 5/20/2021.

The Surge 2, and Code Vein, both games I have finished as of this writing. I don’t know if I’ll do the same narrative treatment. It’s easy to streamline and automate video production, but it’s impossible to do the same thing for writing. Also, I want to try uploading two videos a day for a while, because I’m recording videos faster than I’m uploading them, so I keep falling further and further behind. That means I have to write these tiny summaries twice as fast. Ugh. Maybe it’ll get easier the more I practice.