I was thinking about why some boss fights are fun challenges and other boss fights drive me absolutely crazy with needless frustration. 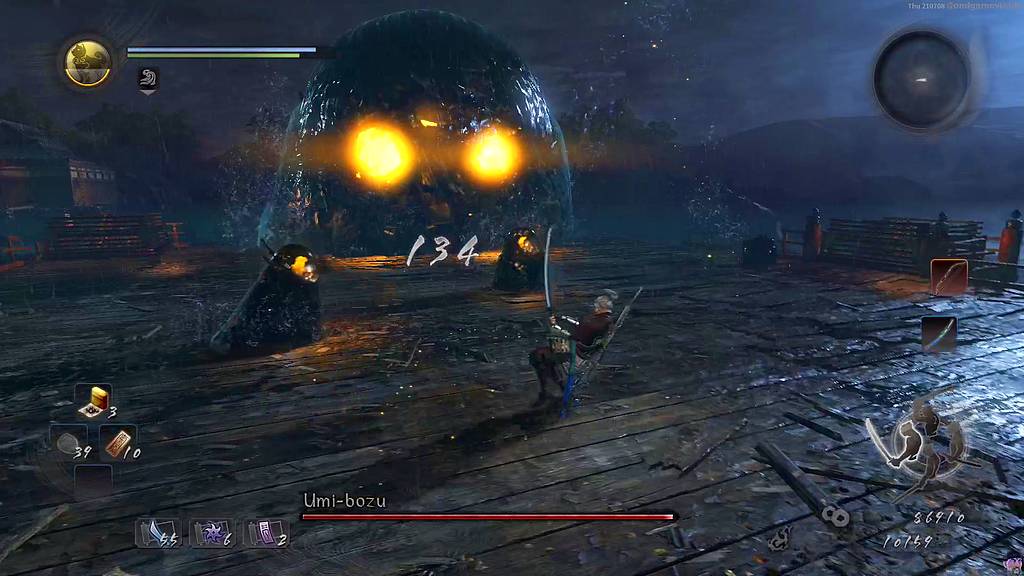 I was thinking about why some boss fights are fun challenges and other boss fights drive me absolutely crazy with needless frustration.

When I wrote this post, I was battling the Umi-bozu boss in Nioh, a gigantic watery gum drop blob that slaps you around with tentacles, and trying to decide whether to rage-quit the game or keep pressing onward in the face of what seemed like a not-fun, time-wasting process of hoping for random luck to be on my side. It occurred to me that there are patterns of why some boss fights are fun and others are not, for me at least. (I suppose it’s possible that other people might have different reactions to boss fights.)

I think these are the major components of most boss fights, roughly in order from least annoying to most annoying:

A Test of Problem-Solving Skills

These are the fights where you try different things and make observations about patterns of behavior that the boss displays, and take advantage of weaknesses that you notice. The ones where you stand behind the boss so they can’t hit you as much, or stay at a certain distance so they only use an easy-to-avoid attack, or something like that. Once you have that “eureka” moment, the boss usually goes down fairly quickly. These are my favorite kind by far.

A Test of Rhythm

These boss fight feels a bit like a dance, a back-and-forth. There’s a rhythm to the fight: The boss attacks with a certain cadence, and if you’re aligned with that cadence, everything flows smoothly and it almost feels like a rhythm game. Everything “clicks” when you get to the right cadence, but if you’re slightly off, things can go south very quickly. I like these kinds of fights, but only after I get the rhythm figured out. It usually takes a lot of practice to learn these to the point that you can beat it every time.

A Test of Reflexes and Muscle Memory

These fights have attacks that come at you with little or no warning, so you either need to predict when they’ll happen, or be fast enough to react to them. These fights are irritating at my advanced age, but I can tolerate them as long as the game lets you recover from mistakes. (Nioh doesn’t at all.) If it’s a one-mistake-and-you’re-dead kind of fight, it’s extremely frustrating (especially if combined with the next category). They tend to require a lot of tries.

A Test of Patience and Attention Span

These fights tend to be extremely simple to understand, but it takes a long time to complete them, because you have to chip away at the boss’s health a little bit at a time. But you have to be vigilant and pay attention the entire time, because the slightest mistake–or blinking at the wrong time, or looking away for 2 seconds to see what the cat knocked over–could result in a quick death and starting over again. It’s a time-waster. They might also involve repeating a strategy over and over and over again. These are the boss fights that take 10+ minutes, where they should normally not be more than 4-5 minutes. Very annoying.

A Test of Luck

These fights tend to feel very chaotic, where a large number of seemingly random elements can combine to kill you at any time through no fault of your own. Basically you just keep trying the boss fight over and over and over again until that one time luck lands on your side and you make it through, but you might never be able to do it a second time. Extremely annoying and wastes the player’s time.

Note: Often paired with the Test of Patience above, because it requires a herculean amount of patience to persevere and keep from breaking your monitor after dying repeatedly to bad luck.

A Test of Reading Comprehension

These fights have some kind of “trick” or “gimmick” that you need to do to complete them, but there’s no way to know about it unless you read about it in a wiki guide or someone tells you, or you happen to get incredibly lucky and stumble into it. In single-player games, it’s basically trolling the player, and a dick move by game developers. Highly annoying.

Sometimes clues will be provided in the form of NPC dialog or other text you can read in the game, which is somewhat less annoying, but only if you happen to find them. (I’m thinking of Sekiro’s Lightning Reversal here, which I thought was adequately telegraphed throughout the game, even though it was hard to figure out how to actually do it.)

Note: Sometimes there are tricks that will significantly shortcut a boss fight if you know them, for example, using a lightning buff on the Bell Gargoyles in Dark Souls. I don’t count it unless you have to use the trick to beat the boss.

Most boss fights sprinkle some or all of these components together. How much they tweak the dials in each area determines how much I enjoy a boss fight, or how much I want to rage quit the game.