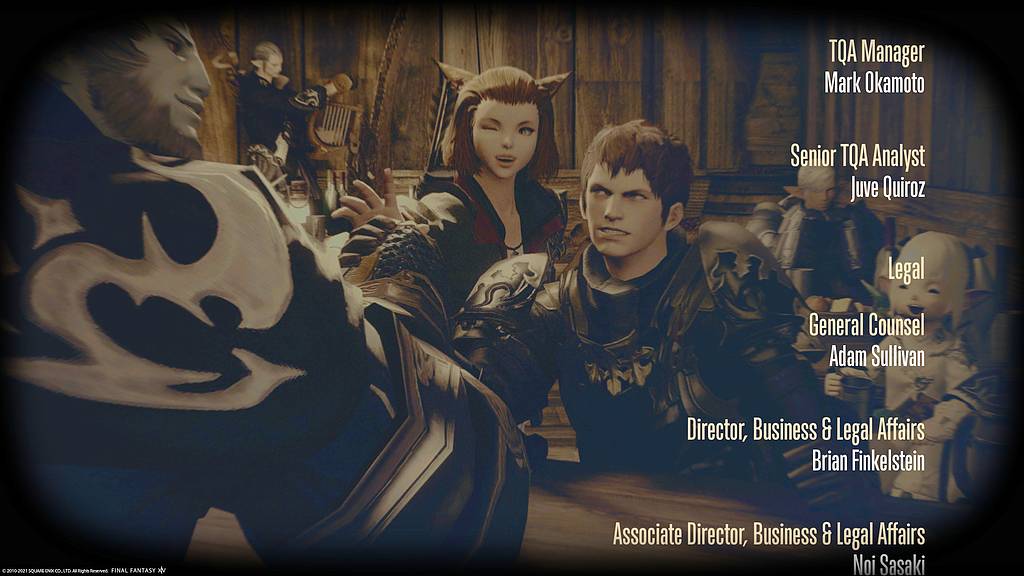 So, yeah. I’m still kind of waiting for that Greatest Final Fantasy Story Ever Told.

It was okay. Possibly even good. But was it great? Fantastic? The greatest ever? I don’t know about that. I need to go back and find some contemporary posts to try to discern what everyone thought was so great about it. Because I’m just not seeing it, I guess. The great part must have been subtley hidden somewhere.

But the overall story didn’t really resonate much with me.

I personally think the story of Ardbert and Renda Rae and that group is a much more compelling story than the one that we, the player, went through. Trying, failing, trying again, failing again, giving up, trying again, then finally, after a hundred years, success and redemption, without any accolades. That’s a story arc. If my player character doesn’t advocate for a yearly Ardbert Appreciation Holiday over in The First I’m going to be very disappointed in her.

Don’t despair though, even if the story didn’t knock my socks off, I still had a lot of fun with the expansion, mostly from reading all the dialog. I got to work on a cartoon Lucky Charms Irish voice for the pixies, a sort-of-kind-of Hispanic voice for Runar, and whatever the heck Lyna’s voice is which I still can’t figure out to this day, but I think she’s an Icelandic voice actor. None of which has any practical value unless I suddenly get a hankerin’ to start a D&D campaign.

Anyway, for all the folks rushing to Endwalker and calculating if you’ll finish in time, it took me about 52 hours to complete Shadowbringers from accepting the first quest to completing the last. That includes the role quests and unlocking flying, but no side quests at all.

Also that was reading every line of dialog out loud, so if you just click-click-click through everything I’m sure you could cut that in half. I did every dungeon with the Trust companions, and the three trials in PUGs which I went into completely blind. I think there were a couple of wipes on the first one, but the second two were done on the first try, and I personally was carried through them all by the healers because I died to all the dumb surprise mechanics you have to read about beforehand.