I spent last night in Final Fantasy XIV standing at the Neverending Storybook (not the actual name) refreshing my memory on story events from the very end of A Realm Reborn and the post-Heavensward stuff with The Word Of The Mother and the Warriors of Darkness. 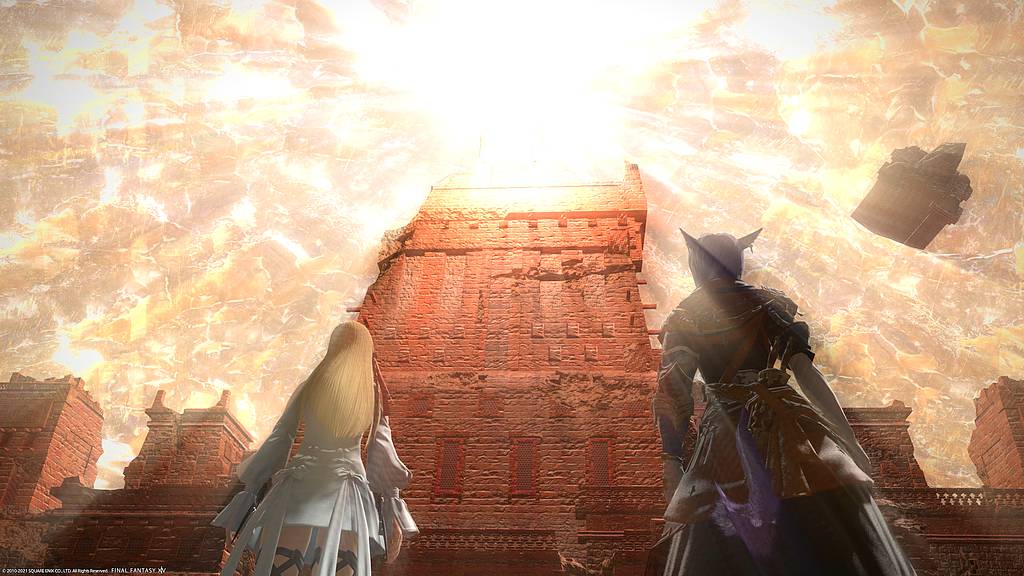 I spent last night in Final Fantasy XIV standing at the Neverending Storybook (not the actual name) refreshing my memory on story events from the very end of A Realm Reborn and the post-Heavensward stuff with The Word Of The Mother and the Warriors of Darkness.

That stuff is directly relevant to the story in Shadowbringers, so all you people speedrunning through the game right now, don’t forget those parts! (Even though it seems completely random and irrelevant to the rest of the story that’s going on at the time.)

In fact, the Word of the Mother is so relevant to Shadowbringers that I can’t help but wonder why there was an intervening Stormblood expansion. The post-Heavensward stuff looked like a big setup for Shadowbringers, but it’s as if they weren’t quite finished with Shadowbringers, so they just bumped it and replaced it with Stormblood. Maybe that’s why everyone collectively decided they didn’t like Stormblood. (But as a reminder, I thought Stormblood was pretty good, and everyone else is wrong.)

I’m about to spoil some stuff so don’t read anymore.

Final Fantasy XIV has a somewhat infuriating habit of not explaining things in clear detail, particularly when it comes to all the wand-waving magicky mumbo-jumbo that happens with crystals and stars and Hydaelyn and whatever. They have a tendency to use the same words for multiple things, or different words for the same things.

For example, all of these things are the same: Minfilia, The Antecedant, The Word of the Mother, The Oracle of Light, Minfilia (the girl), Minfilia (the previous ones), and Ryne. Or maybe, they aren’t the same. I don’t really know. It depends on the context. It’s rather confusing, to say the least, and the game’s dialog doesn’t do much to clear up the confusion. Maybe it’s intentional, to provide fodder for people to yammer about on forums.

Not to mention, there’s more than a few passing references to the history of Minfilia and Thancred in The Lost FFXIV Version 1.0, which exists nowhere except random out-of-context YouTube videos. (It’s somewhat baffling to me that those cut scenes aren’t in the Neverending Storybook. Perhaps there are legal reasons. But I suppose those stories were different characters anyway.)

Anyway, I don’t remember hearing an adequate explanation for why there’s been a hundred years of reincarnated Minfilias popping up in The First, or why they have weird eyes, or why they have sin-eater-fighting magic powers. Just that they exist, and everyone knows they exist. Perhaps it will be explained later.

On the one hand, I like it when stories don’t spoon-feed knowledge to the reader. But on the other hand, I don’t like it when they don’t give you enough knowledge, either. Particularly when it seems incredibly relevant. It leaves me to try to fill in the blanks myself, and sometimes I make incorrect assumptions.

On this most recent adventure through Allen Town fixing railroad tracks, I thought they said quite clearly that we were going to summon The Oracle of Light, and then The Oracle of Light would “consume” Minfilia the girl (by her own choice, a noble sacrifice to save her world, if you will), and replace her with a Super Powerful Minfilia Of Old, and then they’d be able to find the remaining Lightwardens. That was a really interesting moral quandry for Thancred.

But what actually happened was Minfilia the girl “consumed” (in the words of Emit Selch) The Oracle of Light instead, got new hair, new eyes, and new magic powers, and Minfilia Of Old is … apparently … finally gone. Again, for what seems like the millionth time now, so of course I don’t believe it for one second.

I can’t tell if I completely misread the narrative, or they did it intentionally and it was supposed to be a dramatic twist that I didn’t see coming. In the end it turned out to be somewhat of a let down, a bit flat. All the stuff I thought they were building meant nothing, and now there’s a whole different character dynamic which isn’t as much of a moral quandry for Thancred.

Thancred has never been a character I particularly liked, incidentally. He’s just kind of there. It was interesting to see that they might finally be giving him something meaningful in terms of character development, beyond just “the guy who disappears and gets information off-screen a lot.”

Anyway, I’m happy Ryne is still there. (You hate to watch kids make noble sacrifices for nothing.) She’s the only principle character who seems to have a character arc in this expansion thusfar. I also wish we’d see Lyna more, who has a fantastic voice actor, and that guy Runar. And whatever happened to that kid at the Inn at Journey’s Head? (Which I previously thought was called the Inn at Journey’s End.) All the best characters in FFXIV are the ones we only get to see for a couple of side quests before the main cast moves on.

By the way, there might be people out there dying to explain everything, because if there’s one thing fans of games love to do, it’s explain things. But I do know where to find wikis with all these explanations if I want them. I’m musing about the story in-progress, delivered in the way the storytellers intended, things that we used to do in the old days, before binge-watching, when we had to wait a week between episodes, and we speculated on what might happen next and what the previous episodes meant. Playing an MMORPG expansion for me is, in fact, just like watching a television series.

P.S. It cracks me up that Thancred and Alphinaud used to be voiced by Taliesin Jaffe and Sam Riegel in A Realm Reborn. It’s exactly like listening to Percy and Scanlan from Vox Machina.