Yesterday I flippantly remarked, “Not exactly a deep meditation on the human condition,” about the Final Fantasy XIV Shadowbringers story so far. But there was a conversation that my mind keeps returning to: A conversation between the Crystal Exarch and Lord Vauthry. 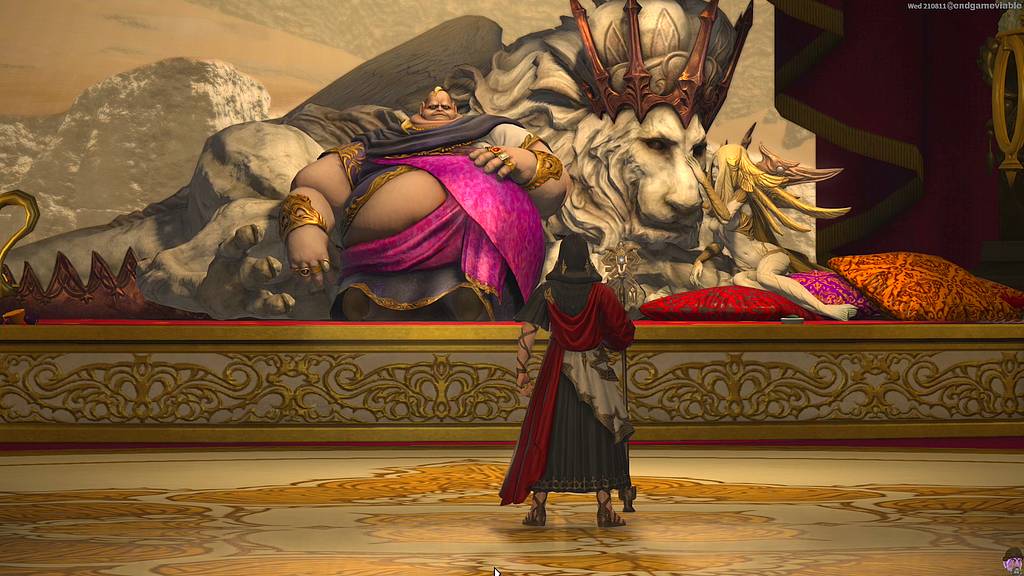 Yesterday I flippantly remarked, “Not exactly a deep meditation on the human condition,” about the Final Fantasy XIV Shadowbringers story so far. But there was a conversation that my mind keeps returning to: A conversation between the Crystal Exarch and Lord Vauthry.

Thankfully I found the text on the Internet so I don’t have to transcribe it myself. (I’ve cleverly edited this to remove the bits that don’t quite reinforce my point below.)

Crystal Exarch: For a hundred years, they [man] yearned for a means to fight back against the sin eaters and at last they have found one. Yet you choose to stand idly by and do nothing. Why?
Vauthry: Why? Because this “hope” you cling to is nothing more than a fever dream. An exercise in futility.
Vauthry: Even should you slay the sin eaters, the world as we know it is beyond salvation.
Vauthry: With what little land and resources remain, the people would be free only to starve.
Vauthry: Before long they would turn to violence, then to war, and ultimately usher themselves unto oblivion.
Vauthry: Men are fickle creatures who entertain vague ideals without the faintest notion what they cost. But a little fear can go a long way towards helping them realize what it is they truly need.
Crystal Exarch: But man is more resilient than you think.
Crystal Exarch: His achievements are not the product of violence and bloodshed but compassion and understanding.
Crystal Exarch: This calamity is but another crisis to be overcome. And we will─once we eliminate the sin eaters.
Vauthry: You poor, deluded fool. These people care not for the morrow. They care only for the now, and the contentment they lack. What good is a paradise to them if it is a thousand years in the making? Or even a hundred!?
Crystal Exarch: You underestimate them, Lord Vauthry. They see further than you think. I have beheld it in the blood and sweat and tears of those who would sacrifice everything for a future they may never know. That their children may never know.
Crystal Exarch: I have beheld it in the hopes and dreams of those who came before, which we bequeath to those who come after, that they might in turn build upon the foundations laid by our forebears.
Crystal Exarch: These are the bonds which hold man and his world together, not your gilded chains─and I will resist your every effort to shackle him.

I keep thinking about that exchange, because I keep finding myself agreeing more with Lord Vauthry than the Crystal Exarch.

The Crystal Exarch is supposed to be the one who’s good and righteous and Stands Against Evil No Matter What and all that. But everything the Crystal Exarch’s saying here is pure unadulterated bunk. It’s just a bunch of idealistic nonsense with no grounding in reality. Wishes and hopes and rainbows and unicorns; pure fantasy. The dreams of someone who has apparently never stepped outside their isolated bubble. “I want this to be true so therefore I believe and affirm that it is true.”

Lord Vauthry, of course, represents the evils of debaucherous excess in our Shadowbringers tale. One (or more) of the Seven Deadly Sins, a very Christian evil, which may or may not have been intentional. (The world loves to portray Christianity as The Bad Guy these days, but, at the same time, you cannot portray an overweight person as The Bad Guy anymore. Mixed messages here with Lord Vauthry.) The point is we’re not supposed to like him, narratively speaking.

But Vauthry has the far more realistic assessment of the world and its people. (Final Fantasy is still stuck in The Dark Ages and refers to “people” as “Man,” something I’ve strangely not heard a single person criticize Square Enix for online.) People as a whole are, in fact, quite dumb, and live only for today. I think it’s pretty easy to see if you look at any of today’s news, or read about any time period in the history of the world, or spend more than two seconds on any game forum or glance casually at Twitter.

The point here is not to render judgment upon humankind, but to say that was a good, thought-provoking meditation on the human condition, and I will now place that conversation into the Pantheon Of Best Shadowbringers Moments So Far. Which are, for the record, to the best of my recollection:

Anyway I finished the Rak’tika Greatwood last night and I’ll be moving on to whatever zone is after that. Our Hero is currently just waking up from the forced nap they get after every zone, after which I assume we’ll meet the Crystal Exarch to get our marching orders for the next McGuffin Hunt.

P.S. I also got the silly polar bear mount because that’s apparently what you’re supposed to do in MMORPGs to fit in.