Magi mentioned a topic in the Blaugust discord: “How do you personally get your opinions or thoughts across in a post?” 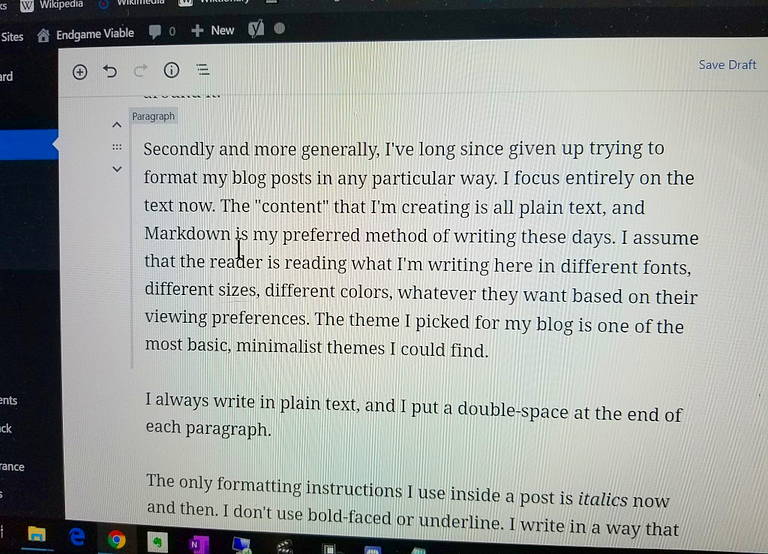 Magi mentioned a topic in the Blaugust discord: “How do you personally get your opinions or thoughts across in a post?”

It’s the magic question in all writing: How do you communicate what’s in your mind into the mind of a reader? It’d be great if there was an easy answer to this question.

Well, there is an easy answer: Simply ask yourself what your words mean to every other human on Earth.

And so on, and so on, for some 9 billion variations. Simple.

Ideally, written words should mean the same thing to every potential reader. I tend to use the simplest words possible. I don’t often stray into complex vocabulary when I’m trying to communicate thoughts and ideas, especially if I think they might be controversial.

Controversial topics are often littered with minefields of “trigger words:” Words which immediately set off an emotional response in the reader as soon as they’re uttered, shutting down any possibility of further communication. They’re usually the same words that end up in the trending topics lists, and the words that content farms and news outlets love to use as they drive higher engagement, the magic currency of the Internet. I try to avoid them. A trigger word might drive a reader into an instant rage, but the exact same thing, stated a different way, might have them nodding in agreement. Because humans generally aren’t too bright, ya know?

I, for example, can’t stand the word “wholesome.” I think it’s a horrible word that stands for horrible things. To me, it has a strong connotation of divisiveness, of gatekeeping, of us-versus-them, of oppression and thought-policing. It reminds me of Stepford Wives and Sunday School and Good Christian Values, of politicians demanding that our children not be exposed to any of That Darn Rap Music because it’s not wholesome. In the immortal words of Huey Lewis from Back To The Future, representing the entire wholesome community, “You’re just too darn loud.”

But now I see “wholesome” has made a big comeback and circulates social media as something positive, and it makes me vomit a little in my mouth every time I see the younger generations embracing that cancer of dystopian propaganda.