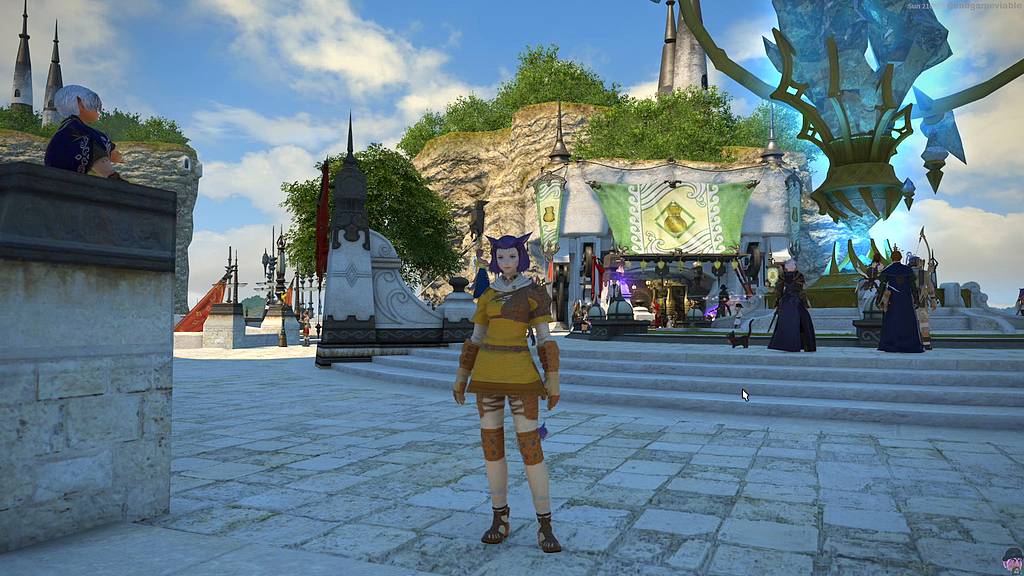 In 2017, I recorded my entire playthrough of Stormblood (except the bit at the end where I quit), and now in 2021 I recorded my entire playthrough of Shadowbringers (what I’ve played so far at least), and now that I’ve done that, I regret horribly that I didn’t record either A Realm Reborn or Heavensward. I could have recorded Heavensward back in 2015. I had the technology back then. But I didn’t, and I regret it to this day. So I’ve had a long-term life goal of going back and re-playing A Realm Reborn and Heavensward, so I can record them.

In most MMORPGs, it’s not a big deal to start a new character and replay the story. In Final Fantasy XIV, it’s a massive pain. You unlock so much stuff on your journey through that game, that losing it all is like losing two limbs, and then two more limbs.

I’ve started about five new characters with the intention of replaying A Realm Reborn. I’ve successfully recorded all three starting zones and those short little introductory stories therein, the ones where we first meet Thancred and Y’shtolla and Yda and Poppy-limo (a name I shan’t bother trying to spell correctly), and make our way to the airship to leave our homeland. (It’s “Part 1” in the parlance of New Game Plus.) But with each of those characters, I got to the Sastasha dungeon and just stopped. Because dungeons are always a very tall brick wall for me in Final Fantasy XIV, obstacles that need a lot of personal work to overcome. Especially with a new character.

But last night, I finally tried out the New Game+ thing that everyone told me about. At first I couldn’t get it to work, because the menu option was disabled for me. It turns out, in Final Fantasy XIV tradition, everything needs to be “unlocked,” so you have to find a pitiful old man near The Waking Sands, a surprisingly well-hidden tidbit of information in some of the Google pages describing how to unlock the thing.

Next I made a glamour of the dopiest low-level gear I could find, then I changed my character’s hair back to the way it looked when I started the game, started up New Game+ in “Part 2” of A Realm Reborn, and viola, a passable facsimile of my character’s experiences in the Main Scenario Quest some six years ago. (Fun fact: I’ve changed my character’s hair a bit with each expansion to make it look like she’s gotten older and wiser, a difficult thing to accomplish in a game that abhors the appearance of age.)

Part 2 starts with “It’s Probably Pirates,” that old familiar quest that puts you into Sastasha. So I went through that dungeon last night. Wow that dungeon goes by fast now. I remember that being one of the longest, slowest dungeons ever, a horrible introduction to dungeons in FFXIV, where the tank can never hold threat because they’re so hobbled. But last night we blew through that thing like it was barely a speed bump, with the tank chain-pulling a million things at once. I guess it just depends on who you get in the roulette.

After that I went through Tam-Tara Deepcroft (the very next quest), which went similarly fast, but not quite as fast. It was a more “normal” dungeon experience of the kind I might have expected from Sastasha. (That scene of the rival adventurers losing one of their own after Tam-Tara Deepcroft was dark holy crap.)

You can even get low-level gear drops from the low-level dungeons, so you can make even dopier low-level gear glamours! (I’m obsessed with making low-level gear glamours, to stick it to everyone who thinks that appearance is a reliable measure of player skill and worth. You know the players I mean. All the ones standing around the three main cities with their glowy weapons and sparkly mounts. Those people are the evil elites that must be thrown down by the MMO masses.)

I don’t know if I’ll carry through with the entire story in New Game+, because it doesn’t quite feel right to re-play old story stuff with the same character. As much as I’ve tried to make my Warrior of Light/Darkness look and feel the same as she did six years ago, when she was but a lowly Adventurer–little more than a speck dirt on the ground–it’s just not the same. My character is still actually a level 80 Bard so none of the low-level mobs bother me, for example. And I can teleport anywhere in the world. And I can ride a chocobo when I didn’t have one before. I can probably even fly in the old zones, a nifty feature they snuck into the game at some point without telling me.

Anyway working through story content is way more fun for me than endgame grinding, so I’ll probably work on the low-level stuff instead. Life is a lot less complicated at the lower levels in FFXIV anyway.