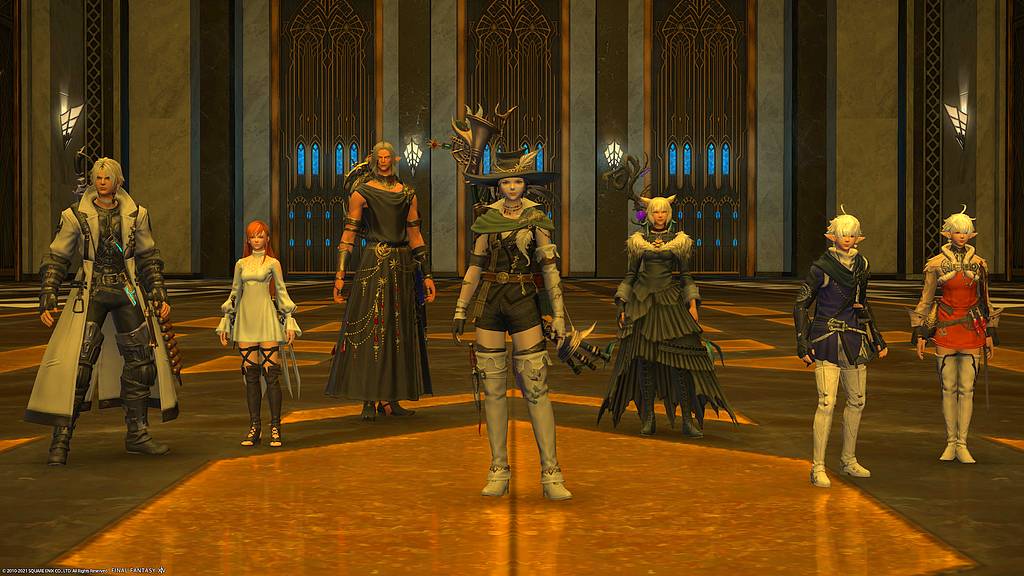 Out of curiosity, I went looking to find some contemporary accounts of why Shadowbringers was The Greatest Final Fantasy Story Ever. Because it wasn’t clear to me.

Probably spoilers and all that. At what point is it safe to talk about an MMORPG story? Never, honestly. Perhaps we can learn something from the Critical Role community and all of their [C2E65]-style tags … add a tag every post with the point in the game that must be acheived before it’s safe to read the post.

You must have completed the Main Scenario Quest entitled “Shadowbringers” to read this post safely. It’s the last one in Shadowbringers, the one that has the credits. The first credits, that is. There. I’ve labeled this post appropriately.

Nobody ever really tells you why they thought Shadowbringers was so great. I suppose to avoid spoilers. Or perhaps people don’t know why. Perhaps they just liked it for unknown reasons, which is certainly a valid response to any piece of art. Sometimes we don’t know why we like something, we just do.

I thought it was fun, and entertaining enough to stick with it from beginning to end. I’d rate it as more memorable than Guild Wars 2 and World of Warcraft, but I wouldn’t have raved about it like others seem to have done. It sure wasn’t a Last Of Us Part II, I’ll tell ya that.

To me, it had more of the feel of familiar likable characters doing fairly straightforward things, which is “good enough” in most storytelling. The NCIS philosophy, if you will.

I couldn’t find any one particular thing that stood out to me as “the thing” that would have had mass market appeal, so I went digging for contemporary reviews. Back in the summer of 2019, Kotaku’s Heather Alexandria suggested it resonated because of the epic scale of Araumot’s destruction in the final dungeon and that you felt sorry for Emet-Selch in the end.

True enough, but to me, that’s normal. The baseline expectation for a story is that you identify with and understand the villain. So they merely reached the bar of “average” on that point, to me.

Still, I don’t think it’s controversial to say that Emet-Selch was the best character in the expansion. He certainly had more depth and backstory than any of the Scions, and he was far more interesting as a villain than Vauthry or Ran’jit. Better than Zenos in Stormblood (though, strangely, I find the post-Stormblood Zenos much more interesting, because now he has a backstory and a motivation). I don’t remember much of the Heavensward story so I can’t compare it to that one. Perhaps I blogged about it.

As for the final dungeon, it was a visual spectacle but also kind of a pain in the butt, as a Trust dungeon. It’s hard to view dungeons as story scenes in Final Fantasy XIV because your experience of narrative is so often overridden by your need to run, dodge, and shoot. It drives me insane how much dialog FFXIV throws into dungeons, trials, and raids that you can’t see in the middle of all the chaos. (Particularly those teeny tiny chat bubbles that only stay on the screen for a couple of nanoseconds and often don’t appear in the chat log.)

In any case, I’m pretty sure we’ve seen dungeons before that took place in the middle of a war zone with people running and screaming around us. I think there was one at the end of Stormblood. I don’t remember the name. I remember running it a lot for gear though. I wonder if that Kotaku author did a story skip to write that review.

Kyle Campbell of IGN suggested it was because of the reversal of the light and dark tropes: “A tale of how darkness should not blindly bend the knee to light, for there is just as much beauty in a sea of stars as there is in a sunrise."

I didn’t get that message at all. The message I got was: Heroes defeat villains, regardless of whether they have a point or not.

It’s true enough that they did flip the meanings of “light” and “dark” to “evil” and “good,” but they didn’t quite flip the meanings of “good” and “evil,” which is where I wanted them to go. They got tantalizingly close a few times, but in the end, they didn’t lean into it. We only felt bad for Emet-Selch but a few moments before we were showered with unending praise for doing The Hero’s work.

I don’t know. Maybe I’m too old to understand why this is a novel concept to people. I’ve pondered the concepts of “good isn’t necessarily good” and “evil isn’t necessarily evil” for decades. It’s a particularly fun thought experiment (in private, of course!) in today’s world where everyone is screaming at us every day about how evil the evil is, and how good the good is. Shadowbringers just barely scratched the surface of that debate.

Laurence Phillips of PCGamesN has a much more balanced viewpoint that closer matches my own.

Though it deals with relatable, human experiences of grief, tragedy, and behaviour in the face of mortality, its persistent melodrama undermines its most powerful moments time and again … by falling back on these tropes Shadowbringers’ story shies from true brilliance and becomes, well, commonplace. In the end, it is just another Good vs Evil story.

Yeah, that’s a pretty good summary of Shadowbringers. It was good, but it definitely fell short of great. I’m right on the razor’s edge of declaring that Stormblood’s overall story was better. :p

The game is better in Shadowbringers, though. The mechanics, that is. A little. It’s mostly identical to Stormblood, but it’s better because of one key feature: The Trust system. It’s criminally underutilized. I wish we could do Trials with the Trust companions too, but alas, we cannot. Thankfully 8-man instances are far less stressful than 4-man dungeons. Nobody cares if one out of four DPS dies in a trial. (Trust companion support also needs to be added for every previous expansion, too. How frickin' cool would it be to run Sastasha with Isildaure and Alianne? They’re sitting outside the dungeon already!)

I see a lot of grumpy newcomers complaining about stuff in A Realm Reborn, and my general response would be that, yes, all those things you don’t like are completely fixed or a lot better by the time you get to Shadowbringers. One of them is the Trust system. The forced grouping no longer completely ruins your experience of the story. In Shadowbringers, the Main Scenario Quest is so, so much better when doing the dungeons with the actual characters in the story instead of that random half-naked guy with a fat chocobo on his head.