And now we move into videos of games I’ve played during a Free Two-Month Stadia Pro Trial phase (which I got from someone at my new job). There are a whole lot of free games to click on and play with a Stadia subscription, but the down side is that 99% of them are games you’ve never heard of before. 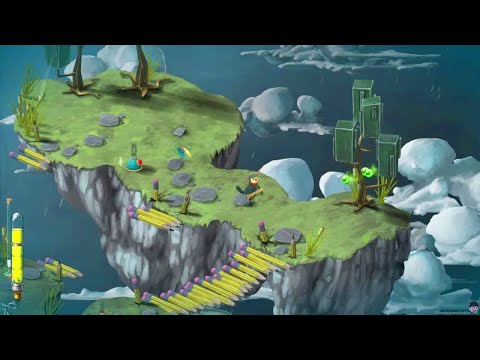 And now we move into videos of games I’ve played during a Free Two-Month Stadia Pro Trial phase (which I got from someone at my new job). There are a whole lot of free games to click on and play with a Stadia subscription, but the down side is that 99% of them are games you’ve never heard of before.

Republique - Snap Judgment (Stadia). Weirdly popular on my channel. Okay stealth/adventure/puzzle-style game with at least a mildly interesting dystopian start to a story and a cast of big-name voice actors. Interesting concept–ie. viewing all the action through security cameras–but not really my kind of game. The first of many free games I tried during a Stadia Pro free trial period. (I actually liked this game well enough to return to it later.) Recorded 3/19/2021. Journey to the Savage Planet - Snap Judgment (Stadia). Also weirdly popular on my channel. Okay mix of No Man’s Sky and Borderlands and WildStar with a sense of humor that could be funny if it didn’t try just a little too hard at it. Recorded 3/20/2021. Submerged: Hidden Depths - Snap Judgment (Stadia). Very cool meditative sights and sounds in a Tomb Raider-esque traversal adventure but not much … um … depth, hyuk, hyuk. Basically just wandering around collecting collectibles. Great graphics and music though. Recorded 3/20/2021. Little Nightmares II - Snap Judgment (Stadia). Very cool graphics and setting and aesthetic, but it’s a side-scrolling platformer so I have no choice but to hate playing it. I’d rather watch someone else play it. Recorded 3/21/2021. PixelJunk Raiders - Snap Judgment (Stadia). Bizarre arcade-style … something. Headache-inducing color palette. You beat up enemies and jump onto buildings and collect stuff and then you get points and level up or something. Just a bunch of nonsense game mechanics thrown together. Recorded 3/22/2021. Everspace - Snap Judgment (Stadia). Also weirdly popular on my channel. Somewhat like the flying part of No Man’s Sky and/or Elite: Dangerous. Nice graphics. I gave up quickly because it was impossible to control with mouse and keyboard. My brain can’t process flight simulators anymore ever since I switched away from “invert mouse.” Recorded 3/23/2021. Superhot: Mind Control Delete - Snap Judgment (Stadia). My first experience with Superhot, I don’t know if this is an expansion or the original game. It’s mindless fun. For a few minutes, at least. Like a shooter except it’s more of a leisurely puzzle game for people who don’t want to or can’t play actual shooters. (I’ve played a lot more of this game, because it’s a very good “mindless entertainment” game for 10-15 minute intervals.) Recorded 3/23/2021. Ary and the Secret of Seasons - Snap Judgment (Stadia). Sort of a game version of a Saturday morning cartoon. Very basic gameplay, but weirdly Souls-like melee combat. Mildly entertaining story (what happened to Ary’s brother???). “Wholesome” and “pure” if you’re into that kind of gross stuff. Recorded 3/23/2021. Orcs Must Die 3 - Snap Judgment (Stadia). A tower defense game dressed up in pretty graphics. It’s also somewhat like a more interactive, far less complicated version of Dwarf Fortress, oddly enough. Silly graphics and voiceovers, for teaching kids that it’s okay to gruesomely murder hordes of monsters, I suppose. Recorded 3/26/2021. Figment - Snap Judgment (Stadia). A super fun game about a kid’s parents getting killed in a car crash, and the resulting trauma, loss, and depression, in the form of an isometric puzzle platformer. Decent voice acting. I appreciated the metaphor, but it’s not my kind of game. (It wasn’t actually that fun.) Also, more interesting to me personally, in this video I finally added back the outboard Behringer compressor to the microphone channel! Recorded 3/27/2021.