I got a two-month free trial of Stadia Pro and have been trying it out. 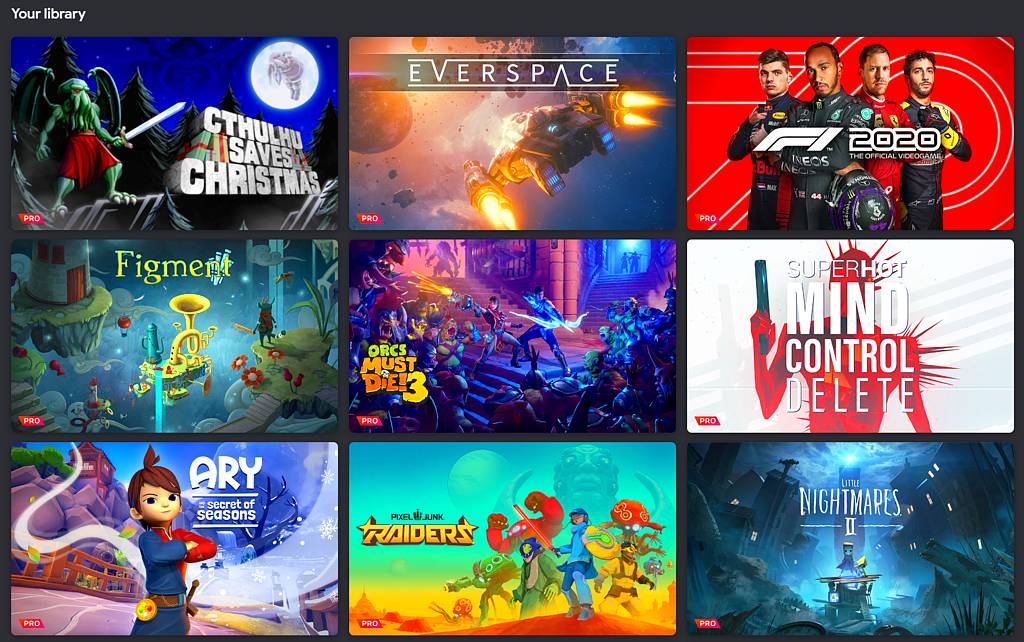 I got a two-month free trial of Stadia Pro and have been trying it out.

I was given a code to get two months of Stadia Pro for free. Apparently, a bunch of free games are available to play on Stadia Pro (every month?), so I’ve been clicking through them and trying them out.

My general opinion on Stadia after a week is that it works fine but there are occasionally noticeable artifacts and glitches and it’s not mainstream enough yet to commit to buying full price games on it. Based on how well it works, though, it wouldn’t surprise me if one or more streaming game platforms became the preferred consumer choice for casual gaming within 5 years.

For now, it’s quite good for sampling games you would never even think about buying in a million years, to confirm that yes, those games are exactly as little fun as you expected they would be.

Here are the free games I’ve played so far:

Okay stealth/adventure/puzzle-style game with at least a mildly interesting dystopian start to a story and a cast of big-name voice actors. Not really my kind of game though.

Journey to the Savage Planet

Okay mix of No Man’s Sky and Borderlands and WildStar with a sense of humor that could be funny if it didn’t try just a little too hard at it.

Very cool meditative sights and sounds in a Tomb Raider-esque traversal adventure but not much … um … depth, hyuk, hyuk. Basically just wandering around collecting collectibles. Great graphics and music though.

Very cool graphics and setting and aesthetic, but it’s a side-scrolling platformer so I have no choice but to hate playing it. I’d rather watch someone else play it.

Bizarre arcade-style … something. Headache-inducing color palette. You beat up enemies and jump onto buildings and collect stuff and then you get points and level up or something. Just a bunch of nonsense game mechanics thrown together.

Somewhat like the flying part of No Man’s Sky and/or Elite: Dangerous. Nice graphics. I gave up quickly because it was impossible to control with mouse and keyboard. My brain can’t process flight simulators anymore ever since I switched away from “invert mouse.”

Ary and the Secret of Seasons

Sort of a game version of a Saturday morning cartoon. Very basic gameplay, but weirdly Souls-like melee combat. Mildly entertaining story (what happened to Ary’s brother???). “Wholesome” and “pure” if you’re into that kind of gross stuff.

My first experience with Superhot, I don’t know if this is an expansion or the original game. It’s mindless fun. For a few minutes, at least. Like a shooter except it’s more of a leisurely puzzle game for people who don’t want to or can’t play actual shooters. It’s a game you play while watching Netflix.

A super fun game about a kid’s parents getting killed in a car crash, and the resulting trauma, loss, and depression, in the form of an isometric puzzle platformer. I appreciated the metaphor, but it’s not my kind of game. (It wasn’t actually that fun.)

It’s a racing game with realistic-looking formula F1 cars. I won my first race, so I saw no need to ever play it again. (Admittedly I was playing with tons of assistance, but still, I left the AI opponents in the dust easily.)

A surprisingly fun physics puzzle game where you have to figure out how to traverse across terrain using your arms and body as levers. I expected it to be terrible but it actually isn’t. In fact I dare say it’s the best game in this list, if I had to pick one to actually buy.

I deliberately avoided clicking on this one because, even though the title makes me chuckle, I knew that the title was probably the best thing this game had to offer. I was right. The joke wears out very quickly and you’re left with nothing but unoriginal JRPG mechanics.