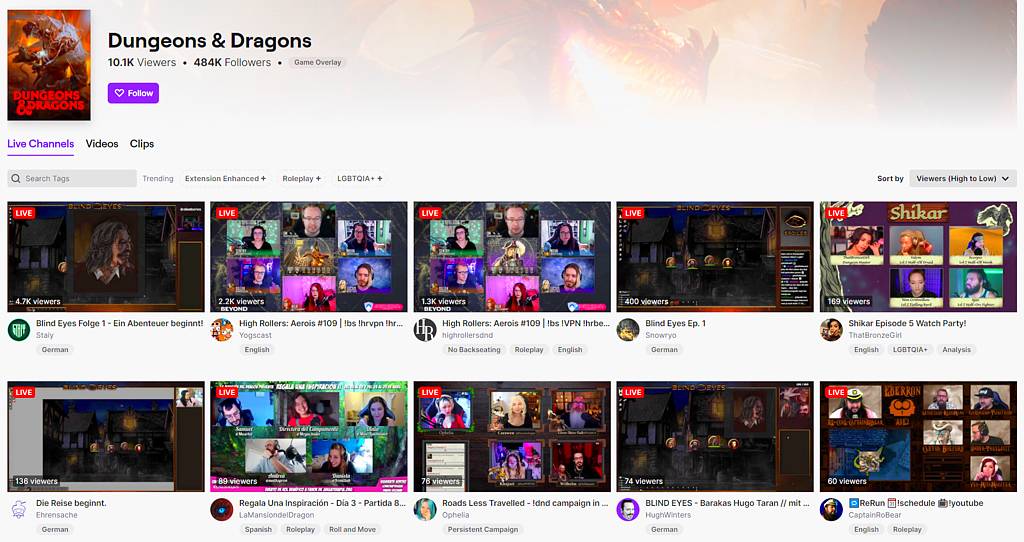 You might find this shocking, but D&D shows are just about the only form of media content I consume at the moment. I don’t watch any television shows or movies. I don’t have Netflix or Hulu or whatever the Paramount or Disney things are.

I think it’s a proven fact now that, thanks to streaming services falling all over themselves to shove any dumb thing out the door as fast and cheap as possible, most all scripted content is garbage, not worth anyone’s time. I’d rather play a game than watch television almost 100% of the time.

Note: It’s probably not a proven fact. It might just be me.

Because oddly, I keep seeing people talking about binge-watching tons of things during the pandemic. (For myself, I can’t think of a single movie I’ve watched during the pandemic, and I can only think of one television show that I watched, but it was only four episodes on Amazon Prime, the only streaming service I have, and I haven’t yet gotten around to the remaining episodes.)

Anyway, back to D&D, I think I wrote about Critical Role before. I still keep up with that one pretty much as soon as they release a new episode. I rarely sit and watch them, unless I’m eating, because that’s not really what you do with them. Instead I turn them on and do other things, as if it were a podcast, and I only pay attention to the screen when something interesting starts to happen.

It’s actually a lot like binge-watching Netflix shows, now that I think about it, except you’re supposed to do other things and not pay attention.

I think that’s the thing people don’t understand about D&D shows, and why people bounce off them. Roughly 90% of the running time, it’s boring as hell. Overall, D&D is quite boring to watch, especially if you don’t know any of the characters or what they’re doing. With Critical Role specifically, particularly lately, you have to anticipate that there’s only about 15-30 minutes of good content within each 4-hour episode.

There’s a YouTube channel that comes up in my recommendations sometimes that just makes a copy of each Critical Role episode and cuts out the boring parts, leaving roughly 30 minute run times. It’s a massive copyright infringement and I hope they go to jail for it, but they do a really good job of distilling down the parts of the episodes that are actually fun to watch. Critical Role themselves should put out an edited version of their show like that and I bet it would be very popular.

Anyway, you’re not really watching a “show” or a “story.” It’s more like you’re watching people brainstorm a story on the fly. It’s like watching the writing room for a show, where people pitch ideas back and forth around a table, and eventually something sticks and the story advances.

It occurs to me that watching a D&D show is basically the exact same experience as watching most sports. I find this comparison particularly funny, because D&D nerds are the kind of people who are most likely to say “sportsball” and believe that sports are dumb.

But if you think about it, a football game–American football, that is–is basically the same ratio of boredom-to-excitement as a typical D&D show episode, and they’re roughly the same running time.

You’re not really paying attention to a football game every second from beginning to end, you only focus on it when someone catches a ball and they’re running to the end zone and the crowd starts cheering. It’s the same with D&D: You only start paying attention when someone rolls a natural one while they’re crossing the bridge over the chasm of death. (Watch a live D&D game played before a crowd sometime and you’ll understand what I mean.)

It’s the slow buildup of tension and then the sudden release, so to speak. That’s the drug.

These thoughts were prompted by a tweet I read the other day, which I’ll anonymize to protect the innocent: “I’ve never been able to finish a single episode of any of those shows. I think their awareness of an audience spoils it for me. Is there a difference between roleplaying and acting? It always seems like acting to me.”

I thought about that tweet a lot. I translated it into, essentially, “I don’t get it, D&D shows are dumb.” A lot of smart people think that. I used to think that. But why don’t I think that anymore? Is there a rational explanation? I mean, besides the one I just gave above about the sportsball, that is.

I’m pretty sure the transformation for me happened exactly when I got to Critical Role, Campaign 2 Episode 12, “Midnight Espionage.” I talked about that before.

Specifically, the infamous “hospital heist” that begins around here. I couldn’t stop laughing through that entire thing, and I finally realized, “Oh this is why people like watching D&D streams so much!”

It’s the moments when everything goes wrong that make it all worthwhile, and how the DM pushes the players toward making reactive decisions, and how the players react, and how they play their characters during those reactions. It’s the “collaborative storytelling” that happens when the players all have great ideas at the same time. It’s pretty rare, but when it happens, it’s magical.

But if you’re a skeptic, I don’t think you’ll get it even if you click that one episode which I’ve identified as the pinnacle of D&D greatness and watch it on its own. Each episode is not self-contained. The antics and adventures and great moments in any given episode are only possible because of all the things that came before it. It’s the original version of “emergent gameplay.” Callbacks are a vitally important part of the D&D experience. So I was only able to become fully indoctrinated in episode twelve because I had made the decision to slog through the eleven episodes before that one.

An even better example of peak D&D is later in that episode, when they get to the actual heist, which begins around here and lasts for quite some time until the climax starts around here, which was a pretty impressive bit of storytelling, in my not-so-humble opinion. Honestly, Campaign 2 has continued for 100+ episodes since then and I’m not sure it’s ever returned to that level of quality since.

(Weirdly, Critical Role just put out an animated summary of that time period and skipped over almost everything that made that episode so great.)

That animated summary, by the way, is the best attempt I’ve ever seen at making a brief recap of D&D sessions. It’s still not great, but it’s better than the usual fare, which is someone just sitting theretelling you what happened, which ends up sounding like extremely boring exposition, the part you should always cut out of a book, no matter how excited the person sounds saying it.

That should be a lesson to all the DMs out there: I’m sorry to tell you, but every single time you excitedly tell us what happened in your exciting games, it sounds boring. Every. Single. Time. This is a weirdly fascinating topic to me: How do you write about and/or summarize a tabletop session in a way that is actually interesting and engaging to an external audience? Will we ever learn how to do this as a society? Who will be the first to finally crack this difficult conundrum? But I digress.

As for roleplaying versus acting, I couldn’t really think of a good answer to that. There’s a spectrum. I guess I would probably say “roleplaying” is when the player talks about their character in third person, while “acting” is when the player inhabits the character and talks in first person, like, you know, an actor. Different shows and different players behave differently. Depending on the player, there might be a constant shifting from one to the other and back again.

Critical Role is definitely a group of professional actors practicing their acting skills, which is the main reason they’re good at collaborative storytelling. And why their show has such high production values. It started out as friends playing at a table with terrible microphones and cameras, but it has evolved into a polished, professional production. They’re definitely making a “show” for an audience now, and the D&D part is secondary.

The vast majority of the other D&D streams are just people pointing webcams at themselves and trying to pretend that what they’re doing is somehow magically interesting to an audience. Most D&D games should not be broadcast. Unless you’re specifically tailoring the games to play to an audience, it’s not really worth the effort.

Here are the shows I keep up with fairly regularly right now:

And here are shows I have previously watched:

Welp I’ve run out of things to say so bye.