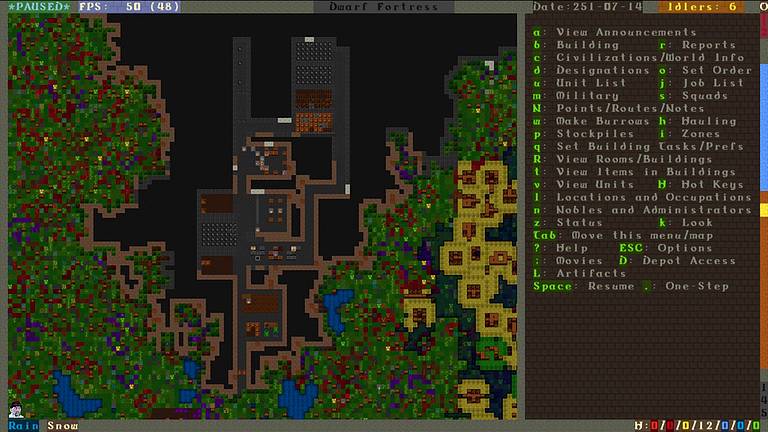 First I tried to play RimWorld again. I played the heck out of RimWorld in December of 2018, recording tons of videos which I still think are among my most interesting to date. Now? I barely remember how to play, and completely forgot why I liked it. So I couldn’t get into it, even with the new Royalty and Ideologies expansions (which honestly don’t change the game very much anyway). It just takes sooooo long for anything fun to start happening. I forgot all the settings I used to use to get games moving quickly.

I thought about my time in Dwarf Fortress fondly, which I played after RimWorld, in early 2019. I re-watched some of the old videos I recorded of Dwarf Fortress and found them quite entertaining. (That was an epic video production process for me at the time, stitching together video clips and overlaying background music with automated scripting tools so I didn’t have to spend hours at a video editor.) Dwarf Fortress is the pinnacle gold standard of that genre, at least the engine of it.

Then I discovered Dwarf Fortress had a Steam page, and it’s “coming soon” (which could be this fall or next year or maybe never), and the graphics and UI depicted on Steam look amazing and I can’t wait to try it.

I think because I added Dwarf Fortress to my wishlist, I was shown a game called KeeperRL, which looked a lot like Dwarf Fortress, except it has an approachable UI and you’re playing the goblins instead of the dwarves. I tried it out. It’s okay, but it’s not the same. Most notably, I don’t like the turn-based manual combat, and I don’t like that I never encountered any existential threats to my base. I had all the time in the world to just sit around digging tunnels underground and nothing bad ever happened. Not very satisfying.

I looked at a bunch of other similar types of games in this genre on Steam and found nothing that looked like it would even come close to a Dwarf Fortress experience.

Then I just went ahead and downloaded Dwarf Fortress again.

*sigh* I mean what choice do I have really pic.twitter.com/46GsjdZeQG

It’s a different version from the one I played in 2019, but it works the same–like editing source code in VI. If you’ve never done that, it’s not a pleasant experience, unless you’re one of those people who swears by VI as a text editor for some inexplicable reason. (The only reason I learned some basics of VI in the last year is that you have to use it if you’re stuck on a Linux ssh terminal.)

Anyway, I’m trying to set everything up again. Even with the Lazy Newb thingys, there’s still some work to be done. I’m trying to find and install the custom Soundsense audio files I recorded back in 2019, because of course I recorded custom voiceovers for a custom Soundsense pack back in 2019. The default Soundsense pack uses a bunch of movie sound bites or something which are extremely off-putting and break every bit of immersion in the game.

But first I had to stop and write this post real quick before it gets too late. My posts have devolved so far down into banality this month that they’re simply reporting what I previously said in a much better way on Twitter.

P.S. It’s a really good blogging day when you can just insert a link to a previously-processed-and-uploaded picture into your post.