I mentioned Kruggsmash a while back. In one of his videos, he plays a game called Cataclysm: Dark Days Ahead. 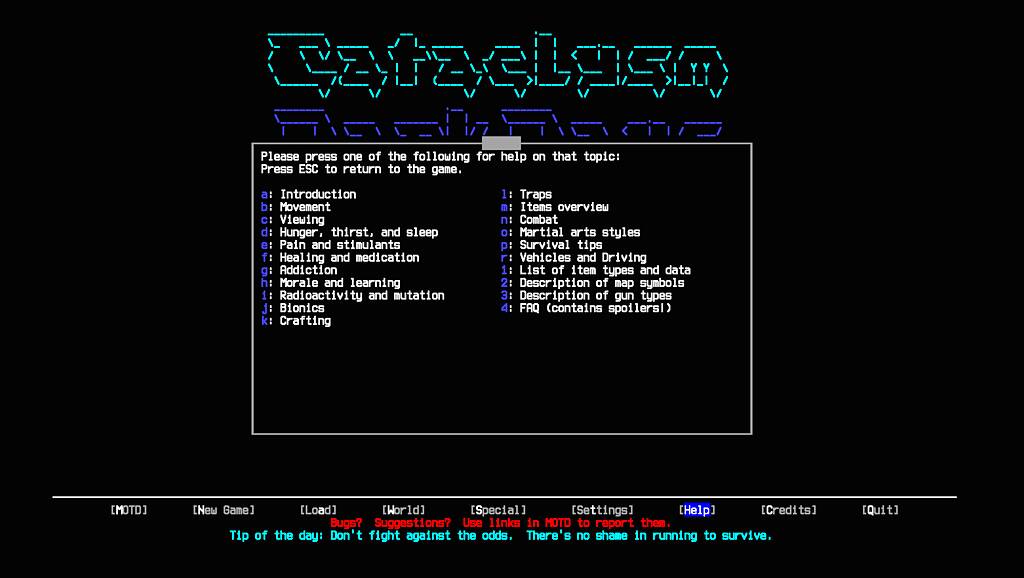 I mentioned Kruggsmash a while back. In one of his videos, he plays a game called Cataclysm: Dark Days Ahead.

It was a fun video. Worth a viewing.

I succumbed to the blatant cross-promotional effort and looked for Cataclsym: Dark Days Ahead (or CDDA if you’re cool enough) on Steam. It’s not on Steam.

I Googled it. It’s an open source game. It’s on GitHub.

Never having seen an open source game before, or even heard of one, except perhaps in the deepest, vaguest reaches of my memory, I downloaded it.

It’s a zip file. There’s no installer. You just unzip it and click the exe file (and then tell Windows it’s safe to run this unsigned, unknown executable, which it definitely isn’t. But no risk, no reward).

I’m here to report that I’ve found a game that’s actually more complicated to understand and play than Dwarf Fortress. I would not have believed this was possible, but it is.

It’s just absurd. After about an hour, I managed to set a readable font size (by manually editing a config file, which turned out to be easier than using the UI), start a “random scenario” game, and get my little guy to pick up a newspaper, then ride a nearby motorcycle around some roads before arriving at a building surrounded by zombies. I drove away, then decide to get off the motorcycle. Then I had to quit because the arrow keys mysteriously stopped working.

I think I had unknowingly gotten stuck in “look” mode while riding the motorcycle. It explains why there was a weird box cursor on the screen that I didn’t understand for the longest time. It renders basic walking movement impossible. Don’t accidentally press any keys. Just don’t. You’ll never recover from it.

(Note: It wasn’t “look” mode, it was “steering” mode. Press ^ to bring up the “vehicle controls” menu and then press l to “let go” of the steering controls. Very intuitive.)

I recommend that you don’t even bother running the game at first. Start with at least an hour of tutorial videos. Perhaps a college course, if one is available.