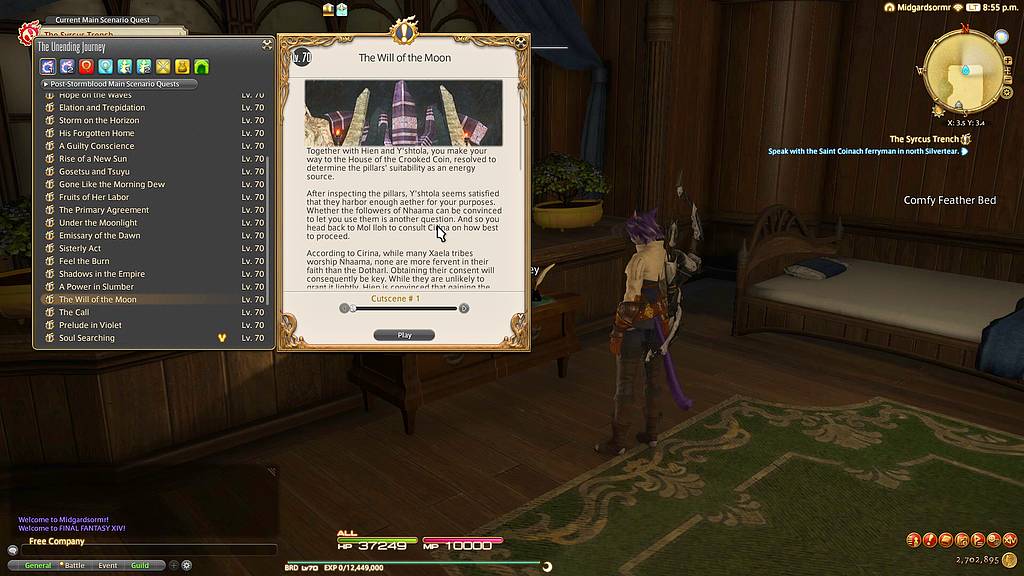 By “played,” I mean that I stood in my inn room by myself, clicking through the cut scenes in the Neverending Story (err… Unending Journey) book that lead from Stormblood 4.3 to the beginning of Shadowbringers.

It was a bit of an ordeal to get to the point where I could do that. Square Enix doesn’t make it very easy to buy and activate stuff for Final Fantasy XIV. Not to mention that the part of their store page where you actually type in your credit card information looks like a janky mafia site that’s going to steal your identity. But I digress.

Next I bought a Tales of Adventure: Stormblood potion, which fast forwards through all of the Stormblood Main Scenario Quests to the start of Shadowbringers. It was a bit of a waste for my character, who was only three or four patches away from Shadowbringers anyway. I might have been able to tolerate doing PUGs for the trials and dungeons, but I didn’t quite meet the gear requirement for Castrum Fluminus, and I definitely didn’t want to deal with any gear grinding.

Unfortunately, the store wouldn’t let me buy the Stormblood potion without an active subscription. So I had to subscribe again, and waste my two week free login period.

I kind of wish I could play with a different character now. It feels like my old character is “retired,” and it feels weird to just skip ahead and start fresh with … the same character. From what I remember, Shadowbringers definitely looked like a fresh starting point for a story. I think they intentionally designed it so that nothing that came before it mattered or existed, so new players could easily jump into the game there (a wise decision for a mainstream MMORPG).

Unfortunately, the character I want to use is only level 17, and the Stormblood potion doesn’t increase your level. So I would need to grind from level 17 to level 70, a daunting prospect if ever there was one.

Or, I discovered, I could just buy one of the potions that levels a job to 70. There’s one potion to buy per job that you want to level, a nice racket. But well worth the $25 price to skip hundreds of hours of grinding. If it skipped just one hour of grinding, it would still be worth it.

But before I even start Shadowbringers, I like the idea of finishing out Stormblood with my existing character. And so I stood in my inn, watching cut scenes from the part of the story that I skipped.

You can watch those cut scenes on YouTube, and I think I did a couple years ago when Shadowbringers was new, but I don’t remember them at all. And it’s so much better to watch them with your character in them. It’s incredibly weird and unsettling to watch a Final Fantasy XIV cut scene with somebody else’s player character in them. For me, at least.

Anyway this is a nice little epilogue to my time in Stormblood. I keep hearing that people didn’t like Stormblood very much, but I liked it more than Heavensward. I can’t even remember Heavensward. It had something to do with dragons, I think. I liked it at the time, but it disappeared from my memory very quickly.

But I do remember Stormblood, which I mainly remember as the very human story of Lyse growing from being “that lalafell’s wacky sidekick” into a real person and leader. And I also liked Fordola’s arc, and I wish they’d done more with her (she did the best voice acting in the expansion). Overall Stormblood felt like an expansion with a lot of relatable and challenging themes for adults, a rare thing to see in video games.

I’m really worried Shadowbringers isn’t going to appeal to anyone who isn’t a Final Fantasy fan, but we’ll see. They say Shadowbringers is the best one yet, which is hard to reconcile in my brain. People also keep saying they like Marvel movies, which is completely beyond my ken.