A brief recounting of the dwarf fortress of Limulitred, “Goldbuff,” in the world of The Eternal Everseeing Dimensions. Updated with illustrations by DALL-E. 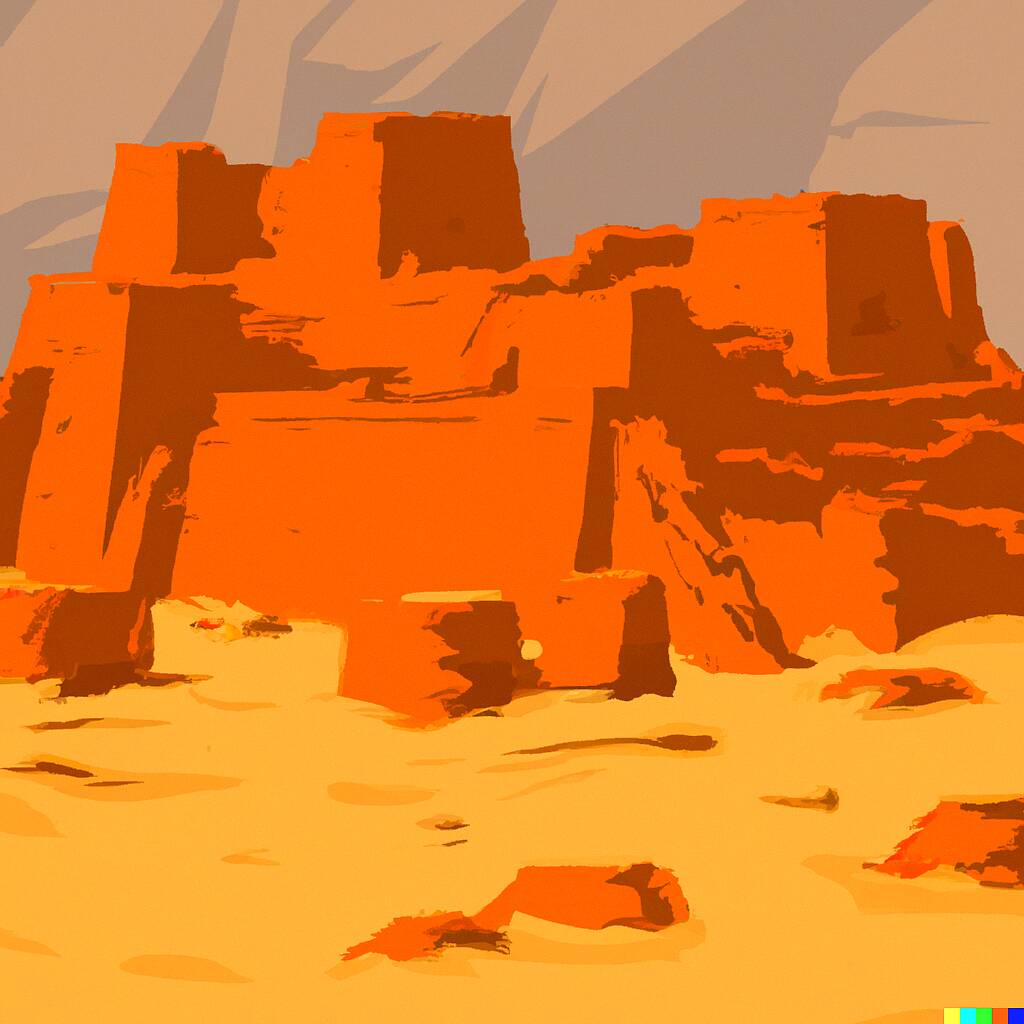 A brief recounting of the dwarf fortress of Limulitred, “Goldbuff,” in the world of The Eternal Everseeing Dimensions. Updated with illustrations by DALL-E.

We arrive to find ourselves surrounded by a desert! There’s no water and almost no trees.

Digging into the sand quickly reveals a soggy layer below the surface, which the dwarves don’t like to dig through. Underground tunnels and shafts fill with water leaking from the walls. By digging some underground channels that fill with water, it’s the only way to provide drinking water for the thirsty dwarves.

The year begins with a population of 18 dwarves trying to organize their meager fortress.

There’s no rock on the upper layers of the desert to build from, so the dwarves dig straight down through the soggy clay until they reach a ledge overlooking an expansive cavern deep underground with a lake several layers below. Water seeping out of the walls of the vertical shaft pool at the bottom, but the crafty dwarves channel it away so nobody drowns.

Migrants raise the population in the fortress to 32. A military forms, but there are no weapons for them to fight with, since there are no metals to forge from.

Wood becomes scarce, so the dwarves open up a passage to the floor of the caverns, where giant fungiwood mushrooms can be cut down for resources. Unfortunately it also opens up the dwarves to attack from cave crocodiles, and two dwarves are dragged underwater and drown. Their bodies can’t be recovered, and their ghosts haunt the fortress.

Food runs out, and the dwarves are starving, yet the yearly caravan gets stuck and won’t trade their food. Deconstructing the trade depot causes the caravan to flee, and the sand is littered with meat, which the dwarves cook up and eat just in time.

After the Spring of 253, there are 86 citizens living in the fortress, including dwarves and human monster slayers. 11 are dead or missing.

I think I’m going to retire this one, because everything is completely out of control, there’s no plan, rooms are dug haphazardly and inefficiently, rocks are piled everywhere, everything takes too long, nothing is organized, there’s no metal, and dwarves keep arriving with no place for them to sleep or eat. It’s just a mess and I want to start over.

Header Image: “the dwarf fortress of Limulitred under the desert” -DALL-E