The Tree Sentinel and Gatefront Ruins. 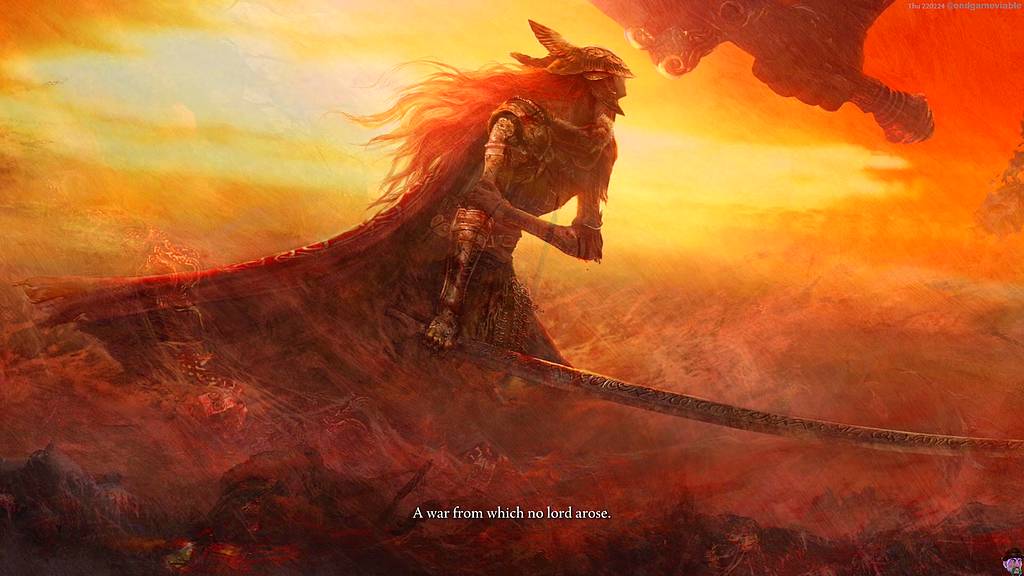 The Tree Sentinel and Gatefront Ruins.

I looked around and noticed that what’s missing from the blogosphere is a narrative telling of playing Elden Ring that ignores the “controversies” and highlights why voluntarily subjecting oneself to the difficult learning curve of a Souls game is fun for some people.

Stepping out the door into Limgrave, the first thing I notice is how overwhelmingly big the world is, and I can go in literally any direction. Naturally I start with the safe path and step over to the nearby “Grace” (aka. bonfire aka. checkpoint) to talk to the friendly NPC patiently standing there, Varré, who annoyingly has a name that is hard to type on an American keyboard.

He tells me immediately that I’m “fated to die in obscurity.” Well, at least he didn’t laugh at me. He continues to explain that I’m “maidenless,” so I won’t be able to get an “invitation to Roundtable Hold.” But, if I just follow the glowing lines from the Gracebonfires, I’ll find all the answers I need. Sounds simple enough.

Before doing that, though, I trot around the surrounding landscape for a while. This is From Software’s first attempt at an “open world.” I walk in the exact opposite direction from where the glowing line is pointing. There’s a cliff there that leads down to an ocean. Eagles sit at the edge of the cliff. I try to kill one, but I miss. I see a beach down at the bottom of the cliff. I spot a very familiar-looking giant crab down there. There’s a little island just offshore. In fact, there are trees and rocks and buildings in all directions clear out to the horizon.

Dark Souls games are famous for being able to eventually go to all the places you see in the distance, but this is a whole new level. Not only can you go to these distant places, but now you can pick any path you want to get there.

Most of those paths, it turns out, are not very exciting. There are flowers to pick up. There are animals to kill, which drop crafting materials. There are rolling soccer ball skulls that contain glowing “runes,” which are the souls–or experience points, or currency–of the game. I kill some flying bat-like creatures, and some pesky mosquitos that give me Blighttown and Swamp of Sorrows PTSD.

Ominously, I pass a number of crucified women just staked out in the landscape for seemingly no reason. Are they real corpses or just effigies? I can’t tell. Probably effigies. It’s clearly meant to remind us of Queen Marika the Eternal from the introduction. There’s one right next to Varré at the start, but he makes no comment about it.

After a short time, wandering around feels directionless and somewhat pointless, like I’m not doing anything. Souls games usually require you to do something all the time. It’s one thing I like about them. It feels weird to have no immediate goals to pursue over the next few minutes of game time, and I don’t like it very much, so I go back to where Varré stands.

I decide to go talk to the golden-armored fellow I see riding a horse just down the hill, in the direction of the glowing line from Varré’s Gracebonfire. Surely that guy will have some interesting things to say. Maybe he’s a horse vendor, where I can get that horse I saw in the trailer.

That golden-armored fellow definitely isn’t a friendly NPC selling horses at all. He’s a very unfriendly enemy with another red boss health bar, named the Tree Sentinel. There’s a world boss just a few steps from the very first door you exit into the game world. Okay then!

I’m a cagey old Souls veteran, so I have no fear of unexpected boss fights. The Sentinel hits me, but I scoff, and heal myself with one of my five heal flasks (I took the starting item that I guessed would give me an extra flask, and it did).

My battle cry is, “Okay, this is unexpected.” I lock on and prepare to duel. I dodge the Sentinel’s charges and smack him with my axe. He’s … um … got a lot of hit points. Way, way more than that Soldier of Godrick back in the tutorial. I barely scratched him with my puny starter weapon.

The Sentinel reminds me of Gyoubu from Sekiro, a challenging but ultimately manageable early game fight. I try to remember the strategy I utilized back then, but I’m missing most of those handy Sekiro tools, and I can’t get the timing right on any of my dodging. Some boss fights are almost like rhythm games, and this initially feels like one of those. If your rhythm is off, you die. (One day in the future I’ll learn it’s not one of those fights.) I’m only able to deplete the Sentinel’s health bar by about 10% before my beginner’s luck runs out and I die.

Time to shake off the rust. (Even though I just finished playing Demon’s Souls and feel like I couldn’t possibly be in more peak Dark Souls playing form.) I have to beat the first boss. It’s tradition. Besides, how hard could it be? After all, I got Iudex Gundyr on the first try. It wasn’t a boss, but I got that big surprise crystal lizard thingy at the start of Dark Souls 3 on the first try, too. It’s tradition!

Well, this isn’t your grandmother’s Dark Souls, is it? Numerically-speaking, by boss fight attempts, the first open world boss in Elden Ring is already more difficult for me than the first two bosses in Dark Souls 3 combined, and I don’t think I’ve played even a full hour yet.

I’m nowhere near beating this Sentinel after seven attempts, so I put aside tradition and pride and speculate that we’re meant to come to this exact conclusion: Go around him. It’s only there for “pro gamers” who want to prove that they’re the best Dark Souls players, while shouting at their webcams in their energy drink-fueled streams all night, vying for the all-important top spot of most followers on Elden Ring launch day. [Correction: I lost to the Tree Sentinel seven times before moving on, not five.]

I personally don’t want to spend my entire first night with the game in the starting location. It’s obvious my character doesn’t have the tools yet to give me any advantages, and only brute force repetition for potentially hours is going to work here. But I want to look around the game at least a little bit before I go to bed.

It didn’t click for me at the time I was playing, but as I write this now it’s clear that the real lesson of the Tree Sentinel is that unlike previous Souls games, you can simply walk around bosses and still make progress.

I kill an innocent sheep in one hit, an acceptable outlet for my feelings of inadequacy and a worthy substitute for a boss battle, and make a wide circle around the Sentinel to continue up the pathway. (Some days later, I’ll eventually come back and defeat the Tree Sentinel.)

First I meet a vendor in the Church of Elleh, but I’ve lost everything to the Sentinel so I have no currency to buy the essential crafting kit he recommends. I continue onward and arrive at the Gatefront Ruins, a small camp of soldiers in green and orange livery.

I walk boldly up to the camp and kill the first guard. Then a second, and a third. They’re re-skinned Lothric Knights, slightly annoying but they’re enemies I’m familiar with from Dark Souls 3. Barely an inconvenience.

Then, in the middle of the camp, one of the guards blows a horn. A veritable swarm of nearby guards converge on me. Unexpected! I run away. Fighting in From Software games is always most advantageous one-on-one. Chaotic scrums usually mean a quick trip back to a Gracebonfire.

I avoid certain death with my clever fleeing strategy. Only the camp leader continues to follow me, so I turn back to fight him. He’s tougher than his subordinates, and uses his big metal tower shield to bash me in the face repeatedly, but I’m undeterred. In fact, once his health bar is nearly empty, I’m so confident I get the brilliant idea to parry one of his spear thrusts to finish him off in style. I mis-time this extremely ill-advised, low-percentage maneuver–as I almost always do in Souls games–and his spear skewers me. I die. Oops. Everyone will get to see the folly of my hubris someday on my YouTube channel.

By examining the description on a dropped piece of armor, I learn that these men in green and orange are loyal to Godrick the Grafted, whoever that is. (Note: Almost exactly a week later, I will learn more than I ever wanted to know about Godrick the Grafted.) I put on the armor, but, not surprisingly, nobody is fooled by my clever disguise and they continue to attack me on sight.

I stealth around the camp, kill most everyone, especially the pesky alarmist horn-blower, and find a basement with a treasure chest containing treasure that doesn’t seem that great (it’s a weapon modification). I also secure a parchment that reveals all of Limgrave West on the map, which is far more useful to me.

After clearing most of the camp, I go after the leader again: It’s an epic duel surrounded by the corpses of his own men. He’s no match for my Dark Souls experience and in the end … well, he kills me again. Ugh. Nevermind. I got all the treasure from the camp, so I leave. There’s more to explore and I’ve got a little bit of time left to play.

(Just FYI on the off chance of spoilers it’s likely that I won’t read any comments on this post very closely until after I’m finished playing the game.)