Elden Ring is good enough, but we’re still waiting for a successor to Dark Souls 3. 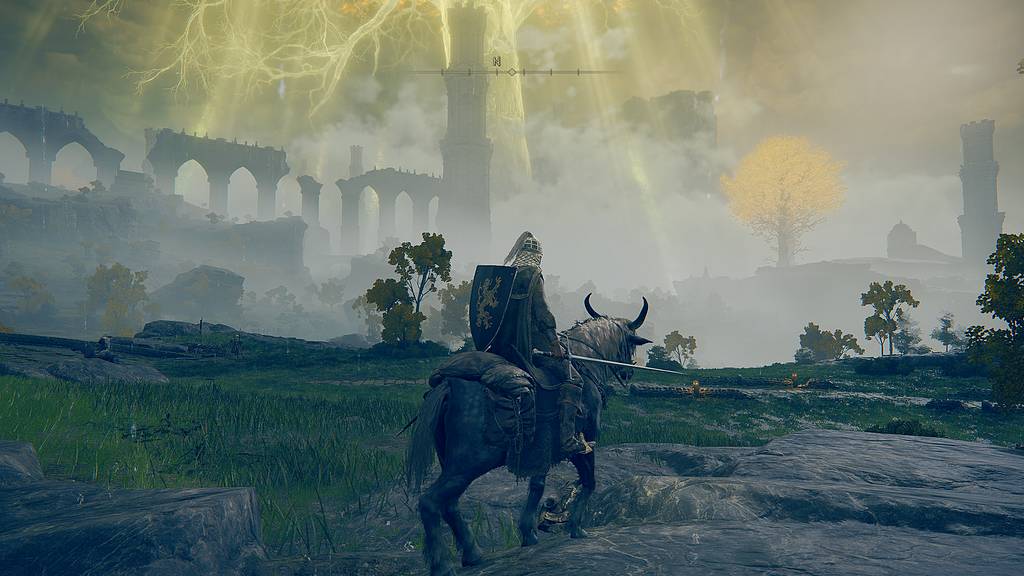 Elden Ring is good enough, but we’re still waiting for a successor to Dark Souls 3.

Some people like help playing games. I usually don’t. Especially From Software games. I don’t want any of my questions answered until I’m finished playing the game. I relish finding the answers on my own. Somehow From Software games cracked a magical formula to make some of the only games in existence where finding those answers is fun for me–the journey of unlocking the game’s secrets is the game for me. It’s a throwback to playing RPGs before the Internet, when you had to draw the maps on graph paper and write down the puzzle text to remember them for later. That old-school flavor is one of the main attractions of the Souls series in the first place.

Exploding what was previously the expert, compact level design out into a vast open world landscape that takes forever to traverse and find anything was a poor decision. The only possible good that can come from it is that because there’s so much empty non-interactive space in the world, maybe they’ll keep adding to it over time. Large swathes of the terrain feel devoid of content to me.

I started with a Hero class, which is a Strength-based “Hulk Smash” melee-only kind of build (something I rarely do in Souls games). It was a big mistake.

After several hours of getting demolished by precisely-timed melee-busting combos from some early bosses, I started over with the Prisoner class, which is a mix of Dexterity and Magic. Having some ranged damage capability is a massive help early on. Magic is extremely effective on some of the bosses. (Unfortunately not the ones that count.)

Stamina supply seems basically limitless in Elden Ring, a major change from previous Souls games. There are actually a lot of mechanics that are more forgiving than previous Souls games, a fact that only helps in fighting trash mobs and doesn’t help at all with fighting bosses.

Outside of fighting open world bosses for bragging rights (and little else), you ride around picking up crafting resources and looking for interesting NPCs or landmarks. It’s reminiscent of The Witcher 3, except without the compelling story and handy quest log driving you forward.

But there are a lot of other games that do open world exploration and traversal better than Elden Ring, and you’d be better off seeking them out if you want to wander around a countryside looking at scenery. Off the top of my head, Horizon Zero Dawn, Horizon Forbidden West (I imagine), many newer Assassin’s Creed games, they’re all much, much better at open world traversal. Elden Ring is a newbie in that space, and it shows.

Mouse and keyboard controls are unimproved from previous Souls games. In fact, I don’t think they’re even finished, as of launch time. You can’t remap the “map” key, for example. It’s always, inexplicably, “G.” I haven’t yet found a key for gestures. It’s possible to play with mouse and keyboard, and I do for the sake of my thumb, but it’s not optimal.

I haven’t seen any of the performance issues I keep hearing about on PC. Occasionally I see dropped frames, but nothing I didn’t see in Dark Souls 3.

But I will say that the dodge mechanic seems significantly more laggy than previous Souls games. I’m constantly shouting “I dodged that!” at my screen as my character stands there and dies, and I know at least one other Souls veteran who has also noticed this.

I think it’s because your character doesn’t start to think about moving until you release the button or key, not when you press it. It must have been like that all along, but I don’t remember having so much trouble with it in any other Souls game, with the possible exception of Bloodborne, which has infuriating button queuing issues. It could be that the game’s bosses now demand so much precision from dodging that it exposes this flaw that’s always been there, or maybe there’s a bug they need to fix. I don’t know. I just know I hate it.

The basic problem is that dodging and running are both on the same button or key input. It has to detect whether you’re “tapping” the button, or holding down the button, to determine whether you’re dodging or running, and some arbitrary number of milliseconds have to pass before it can determine which is the player’s intent. They really should get into the 21st Century and separate those two actions.

I’ve also noticed more animation locking than any previous Souls game. Times when you simply can’t do anything because, for example, your character is stuck in a shield blocking animation, or stuck in the “oops I ran out of mana” animation.

An infuriating problem from Sekiro continues in Elden Ring: Not being able to find the thing you just picked up in your inventory to read its description. You’ll sit there for ages scrolling through pages of inventory trying to find that new thing you found to see what it does, then eventually give up in disgust and forget it even exists. Until some days later you stumble on it and wonder where it came from. It’s a major UI failure they should fix. Just highlight the new thing somehow.

The difficulty of bosses in the first region range from pitifully easy to impossibly hard, with no rhyme or reason to the ordering. Almost all of the bosses are optional, with the exception of progression-blocking bosses.

That’s about all I want to say for now. It’s not a flop by any means, and it’s certainly good enough to keep playing and finish it, but it’s not the game of the decade. I would have preferred a Dark Souls 4.

UPDATE 3/1: I finally got into Stormveil Castle last night after I posted this. It turns into a completely different game inside there: A traditional From Software dungeon crawl game. In other words, it turned into the game I wanted. It just took 20+ hours of open world nonsense to get there.

UPDATE 3/8: I might have to revise my opinion of Elden Ring slightly. After playing almost 60 hours now, it’s better than “good enough.” It’s definitely “good,” and it might even be “great.” I’m completely immersed in the game and its world and have no desire to play anything else until I’m done with it. I think the initial confusion was because I had an expectation that I was going to get Game A, but what I actually got was Game B + Game A, where Game B takes a lot of getting used to.

There’s a lot of talk that the game is “more accessible,” which I wouldn’t say because “accessible,” to me, implies accessibility, i.e. accommodations for the impaired, which Elden Ring definitely doesn’t have. But I would say the game is more approachable than any other Souls games. There’s scores of hours of content and a vast amount of space you can explore without ever having to defeat the first progression-blocking boss. It’s somewhat like Valheim in that regard: There’s a world to explore before you have to defeat a boss to unlock the next world to explore. (The first couple of bosses in Elden Ring are a thousand times harder than the first couple of bosses in Valheim, though, if you tackle them solo.)