I stumbled upon a new (to me) tactical RPG based on the D&D rules. 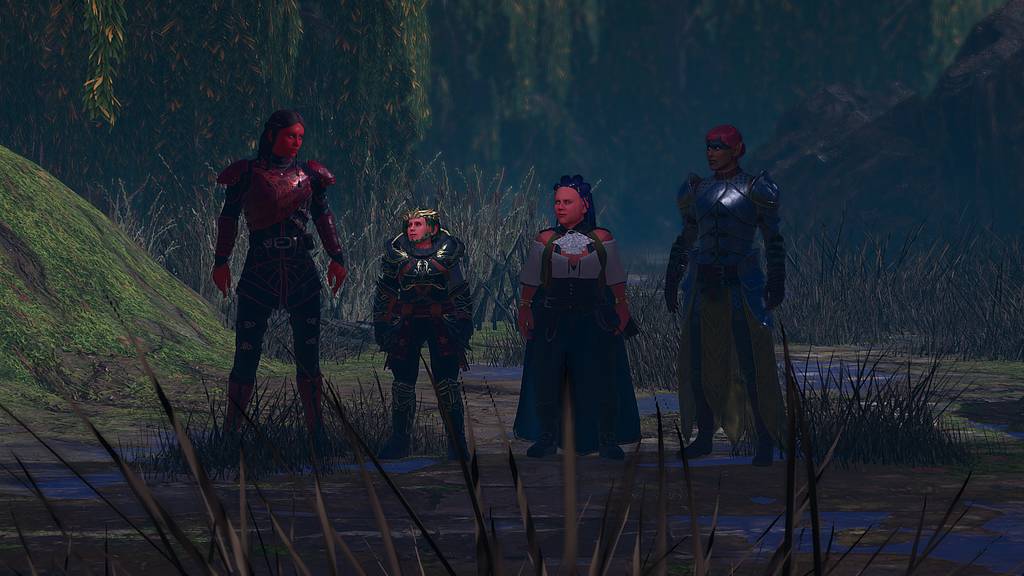 I stumbled upon a new (to me) tactical RPG based on the D&D rules.

I’m glad that Endwalker has been delayed a bit because I’m not yet finished writing and/or publishing my posts about Shadowbringers. That would have been awkward to continue posting about the old thing when the new thing arrives.

So far in November I started NaNoWriMo, then gave up on the second day. Then I had fairly significant back pain that kept me away from recreational computing, sitting down, standing up, or moving much at all for a week or so. And now somehow nearly half the month is over in the blink of an eye.

I gave up because progress is just too artificially slow for me. I was vexed by the daunting chore of making metals, and while I did finally find the second boss, the prospect of traveling halfway across the world to spend hours setting up yet another forward operating base wasn’t that appealing.

I played a little bit of XCOM 2 (for the first time) and Wasteland 2 (again), both of which have good tactical turn-based combat, but the enemies in XCOM 2 have many unfair advantages and I don’t particularly like the parts of the game between the missions. Wasteland 2 also suffers from fairly tedious gameplay in between the combat encounters.

In looking for another of the same kind of tactical RPG, I landed on a game called Solasta: Crown of the Magister. (Which I consistently mislabel Magister of the Crown.) I’ve had it in my wishlist forever, but I only recently noticed that it was fully completed and launched out of early access, and even has DLC already, and it was on sale to boot.

I didn’t expect much from it, as I often don’t with games that originate on Kickstarter, the “please give us money to write our first game in Unity so we don’t have to get real jobs” platform, but it’s actually good. Well, decent. It’s rough around the edges to be sure, but the core game is solid.

Solasta is a turn-based tactical RPG that uses the “Dungeons and Dragons SRD 5.1 Ruleset,” which probably means more to D&D nerds than it does to me. I just know the lingo sounds similar to Critical Role, except it’s missing the obvious Wizards of the Coast trademarks. For example, the spell is called “Hideous Laughter,” not “Tasha’s Hideous Laughter.”

I haven’t actually played Dungeons and Dragons since the first edition rules when I was a kid, which wasn’t even called the first edition back when I played it. In computer form, what I played is closest to the rules that are in the original Baldur’s Gate.

Anyway, Solasta uses fifth edition rules, which, as far as I can tell, is 100% focused around managing the state of “having advantage,” a concept that did not exist in my youth. If you “have advantage,” you’ll probably be successful on your dice rolls. If you don’t “have advantage,” many of your attacks from your pitiful low-level characters will miss and most of your spells will fail and your party will die because of it.

God help you if you “have disadvantage.”

I learned a harsh lesson about disadvantage because I played my first Solasta game with the “Iron Man” difficulty setting enabled, which means if your party dies, the game is over. I tend to do that with tactical RPGs lately, like Pillars of Eternity, Tyranny, or Wasteland 2. It makes for a more exciting video series. There’s not much dramatic tension if you can make mistakes willy nilly and re-load whenever.

Anyway I was doing fine until I got to Caer Lem and a big underground fight with Soraks (lizard people who look a lot like the aliens in the 1980s hit miniseries V) in a cavern that had tons of verticality, and did not realize the importance of taking the time to light all the torches hanging all around the battlefield.

You see, if you don’t have enough light, there’s a good chance that all of your attacks will have disadvantage because the enemies are “unlit” and you’ll miss every time and everyone in your party will die screaming while you watch helplessly. (Even though you, the player, can see everything.)

After my party died, I realized I was enjoying the game enough that I wanted to continue. But I had to start all over again, and starting an RPG a second time can be painful. Thankfully Solasta makes it bearable by allowing you to skip the tutorial.

The voice acting is good enough that my player characters have some personality, even if you can tell that two of the female voices sound like they might be same actor. (Actually my rogue sounds like Daphne from Frasier.) But it’s not as bad as, say, Oblivion.

Most of all, I enjoy the combat encounters in Solasta. The camera viewpoints are frustrating sometimes but otherwise it has a turn-based system that keeps me engaged and on the edge of my seat throughout each encounter, forcing me to have to make good decisions throughout if I want to be victorious. I usually don’t know if I’m going to win or not until some clutch dice roll turns the tide of battle in my favor, and my party barely survives to fight another day.

At least, that was my experience in the first three or four levels. After that, it got a lot easier, but that’s a topic for another day.