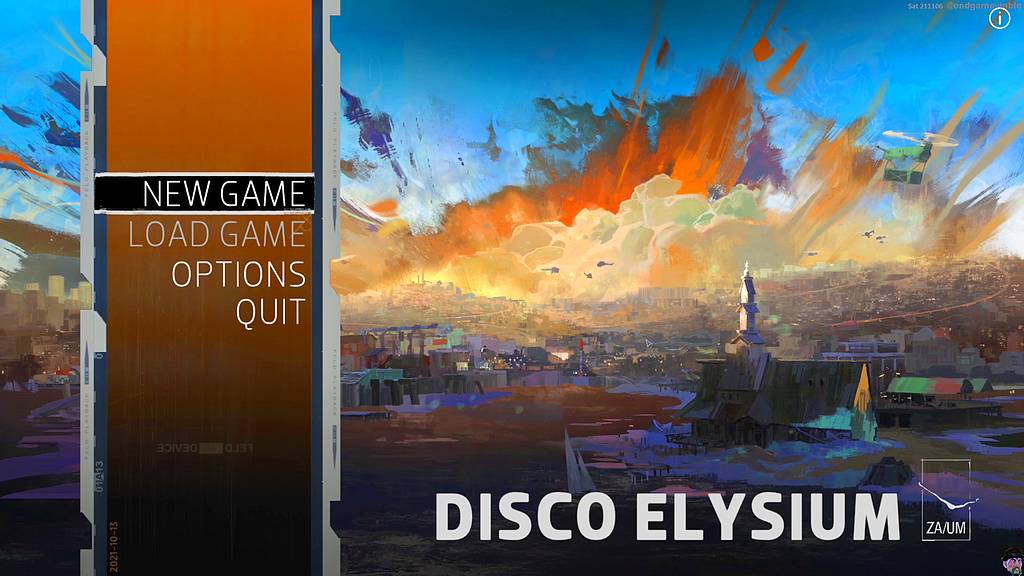 Disco Elysium is one of those award-winning games I bought mainly because it was on sale and I heard it was award-winning.

I never would have bought it otherwise, because it’s an isometric game, and I don’t like isometric games as a general rule. It bugs me that I can’t see past the edges of the screen, or behind things, particularly in role-playing sorts of games, where I want to see everything my character can see.

But Disco Elysium might as well be Zork for all the importance that the graphics have. The game is all in the text. Screenshots are meaningless. You technically do walk around on an map, but it’s only to interact with things that trigger very, very long sequences of interactive dialog. There’s so much text it’s actually annoying that they push it all over to the side of the screen instead of the middle.

Well, I’ve seen dialog-heavy isometric adventure games before–they’re a dime-a-dozen, because they’re cheap to make–but the setting, characters, and general aesthetic in Disco Elysium are unique. I can’t think of anything similar to compare it to. They grabbed every genre known to humankind, threw them into a wood chipper, and built a world out of the sawdust.

The dialog trees go on for days and days and days. It’s a rare game where I forget how long I’ve been playing because I’m so engrossed in seeing where the conversations go.

Anyway, my character is currently working on two things: Finding alcohol and drugs, and restoring Communism. He’s also a Cop of the Apocalypse, whatever that means.

For the record, I’m supposed to be investigating a murder.

But there’s also a Union strike going on that I haven’t looked into, and there’s a secret door in the kitchen of the hostel I can’t get in, and there’s a bookstore with another secret door behind a curtain that I tried to break down, but I couldn’t, then I had a heart attack and died.

I also tried to hit an obnoxious kid once, but I missed and fell down, and my ticker gave out on me then, too. My guy is prone to having heart attacks (my Physique is 1).

I dug my police clipboard out of a trash can, which I threw away last night in a drunken stupor for some reason (before the game started). The clipboard has a secret compartment in it, which contains some mysterious stuff about my past, but I fainted as soon as I looked at it and had to be awakened with smelling salts.

It’s a lot to deal with, so I really need some drugs, and I think the obnoxious kid can get some for me, because he’s high all the time, but he’s really obnoxious and hates cops.

Luckily I found a bottle of Commodore Red in an apartment building, so I was able to get drunk on the job at least. I definitely think I should be drunk before I perform an autopsy on this murder victim, the Hanging Man, who I shot down from the limb he was hanging on with my partner Kim’s pistol. The corpse is still lying there on the ground while the kids play around him.

In any case, getting drunk gave me an extra point of Physique so hopefully I won’t have any more heart attacks for a while.

I also need to find some money or I won’t have a place to stay tonight, and I can’t even imagine what might happen if I have to wander the streets after dark. Maybe the ghosts in the bookstore will come out.

I don’t even know what to say about the RPG mechanics. It uses a skill system, but the skills all have names that don’t mean anything to me, like Esprit De Corps and Savoir Faire. There’s no Archery or Gymnastics to be found.

I picked the Inland Empire skill as my “specialty,” which is something about hunches and gut feelings. I made my first character with random stats that came out 1 Intellect, 5 Psyche, 1 Physique, and 5 Motorics.

Anyway, it’s a fun adventure-style game. I can see why it was award-winning.