We now bring you a brief Shadowbringers update. 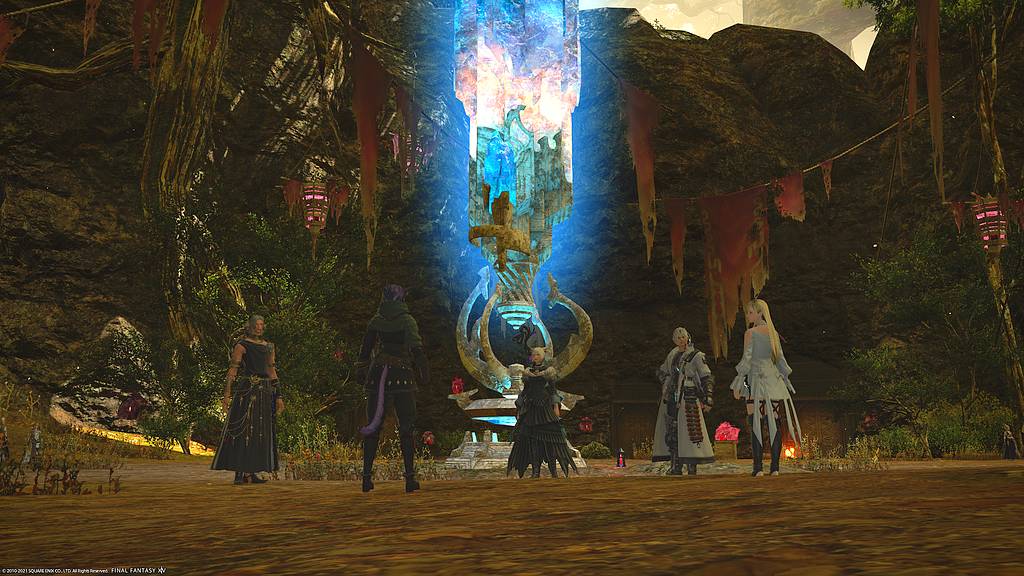 We now bring you a brief Shadowbringers update.

My character has reached level 76. I haven’t done a single side quest, other than the ones that unlock flying, because there’s no need to. I got at least one extra level because I did the Holminster Switch dungeon four times, because I thought I needed to level my AI companions, but it turns out you don’t need to do that just to play through the main quest. (Incidentally, four dungeons runs did not level any of my companions.) You get ridiculous amounts of experience points just turning in the the main quests, and I’m still getting rested experience.

In terms of story, I just started level 74 quests. I’m still kind of waiting for The Greatest Final Fantasy Story Ever to start… I’m at the point where our heroes have just entered Riki’Tiki (not the actual zone name, but I can’t remember it, because every name in this expansion is just an unmemorable jumble of random letters).

There are good moments here and there. Good short stories. I mentioned the brief character arc of poor Tesleen last time, which I would still point to as the pinnacle of the expansion thusfar. I thought there might be more to Tesleen’s story but they just threw her onto the garbage heap of history and turned her into a dungeon boss.

The zone story of Il Mheg, the fae kingdom, was charming, but largely a time-killing side quest in the overall story. A McGuffin hunt, as is so common in MMORPGs. A “middle book” experience, let’s say, if we were reading a fantasy trilogy. The part where the characters are just kind of killing time before the plot advances. I can’t think of any consequential character developments that occurred in that time.

There are things I’m interested in, but the game doesn’t seem to think they’re as interesting as I do. I resonate considerably more with character-driven stories than plot-based stories. So this odd relationship between Thancred and … uh … hrm, maybe I shouldn’t name too many people because I know there are readers way back in Realm Reborn or Heavensward. Thancred and that teenager.

Their relationship is interesting to me, mostly because it strikes me as strange, and also because Thancred has never really had much character development before, not that I can remember at least. But whereas I want them to drop everything to do with these silly Ascians and Calamities and dig into the emotional meat and potatoes of this borderline abusive, weirdly co-dependent relationship, to unravel the murky threads of that story, they keep marching onward with saving the world or some such nonsense.

As we roll into Rikki’Tikki’Tavvi (still not the actual zone name), I’m also a bit fascinated with how they’re setting up this Ascian Guy to be holding the moral high ground over the good guys. I’m delighted with stories that explore moral ambiguity. Nothing is more fruitful story territory than good guys doing bad, and bad guys doing good.

I don’t know much about the Sin Eaters, except they explained that they are evil, bad, horrible, terrible things that must be destroyed on sight because they are unambiguously bad. So of course the first thing I thought was, “Oh, wouldn’t it be cool if there’s a way to rescue and restore the souls trapped in them and our heroes have been mercilessly exterminating them all this time? What if we could have gotten Tesleen back? What a fantastic moral dilemma that would be for our heroes.”

So far there’s been no sign of that development, though. But I’d love for our heroes to have to swallow their morally-superior pride and work with the enemy to achieve a common goal. It’s not very interesting to me to see pure good characters doing good deeds because “it’s the right thing to do.” Ugh. Gag. Choke. Stories are supposed to teach us how to navigate the moral complexities of real life, not trick us into believing real life is a fantasy.

Anyway, we’ll see where it all goes.

I find it somewhat odd that there aren’t a lot of new characters in Shadowbringers so far.

In Stormblood, we had Lyse (not technically new, but kind of), and Fordola, and Gosetsu, and Hein, and Yotsuyu, and Xenos (if you can call him a character), and a bunch of incidental side characters I can’t remember. M’nago, I think, was one I liked.

So far in Shadowbringers, we have the Crystal Exarch, who is not so much a character as he is an exposition-delivery and deus ex machina robot. Lyna is very cool but she has no backstory and no relationships. (Characters are usually only as good as their relationships with other characters, in my personal opinion.) The Mysterious Teenager has a lot of interesting potential, but it’s not yet clear if that’s the focal point of the expansion or just an incidental side plot. The fae folk are comic relief. Feo Ul is very amusing, but not really a character.

For comparison, by this time in Stormblood we had a very strong character arc in progress with Lyse, with a clear beginning, middle, and end to look forward to. In Shadowbringers so far … not so much. Just a lot of plot happening without much character involvement. (To reiterate, I greatly prefer character-driven stories, which is somewhat difficult to pull off in a video game.)

There are a couple of new bad guys in Vauthry and … um, the monk guy, whose name I can’t remember, but thusfar they seem to be factory-produced cardboard-cutout villains with no motivation other than being villainous. I guess they’re meant to be blank slates on which we can project whatever bad people and things we don’t like from the news and Twitter.

Then there’s the Ascian, who I have to assume is the real villain. He’s more interesting, or at least entertaining. But I’ve always felt the Ascians were a bit of hand-waviness in narrative terms, because they appear to exist only to sow chaos for no other reason than to sow chaos, which is quite a silly character motivation if you ask me. An external force to drive plot forward, when the internal forces can’t or won’t. Sort of like a natural disaster.

And I guess there’s poor Ardbert, whom we don’t see nearly enough. The tragic ghost who’s doomed to haunt us forever is an interesting character, and I hope he plays a much bigger role than just a transition between scenes. I honestly don’t remember what happened to him. It seems a lot more important now than it did back then. Back then–I think it was somewhere near the end of Heavensward?–it felt like a random side story that didn’t matter much. I should go back to the Neverending Story book and see what happened. I remember liking Heavensward a lot but I can’t remember a single thing about it now.

There’s other stuff with the Garleans and the Black Plague going on back in The Source which I have to assume we’ll get back to eventually. They just sort of stopped at the end of Stormblood to do this world-hopping trip. Is time even advancing back in The Source? I think so, but it’s “different.” Time moves slower in The First, I think, so we can have an expansion-sized adventure without much time elapsing in The Source.

I suppose we’re meant to feel some sort of tension over whether our heroes will get back to The Source or not, but when the story plays out in a video game, it takes a lot of the wind out of those sails. The player can teleport back and forth at will, so no problem there. And it doesn’t really matter whether the Scions make it back or not, because we can always teleport to The First to see them. In any case, it’s not like any of the Scions have any real ties back to The Source. Urianger doesn’t have a family and children to get back to, for example. The only people the Scions ever interact with are other Scions, and they’re all together in The First.

And again, we know for sure the world isn’t going to end, because it’s a video game, so not much tension there. The only way to make me feel that tension is to present sympathetic and believable characters who feel that mortal peril in-world, and–so far–they aren’t. (They immediately killed off poor Tesleen.) It’s just another day at the office for our heroes saving the world–so far.

Perhaps it’s all just laying the groundwork for something amazing that’s yet to come. Although personally, I think stories are supposed to start amazing, then be amazing in the middle, and then end even more amazing than they started. In a perfect world, at least. Very hard to do in an MMORPG, of course.

P.S. I present these viewpoints not so much to criticize the story, but to write down a record of how I perceive it at this point, so that I can look back and see if/how anything changes later. This is one of those times when I’m glad I don’t have comments, because I’m sure a horde of fans (aka. cultists) would jump in here to explain how my opinions are wrong. Rest assured, fans, I would not write this much about a game I didn’t like and enjoy playing. (I certainly wouldn’t decorate it with pictures, either, which is a massive pain in the arse.)