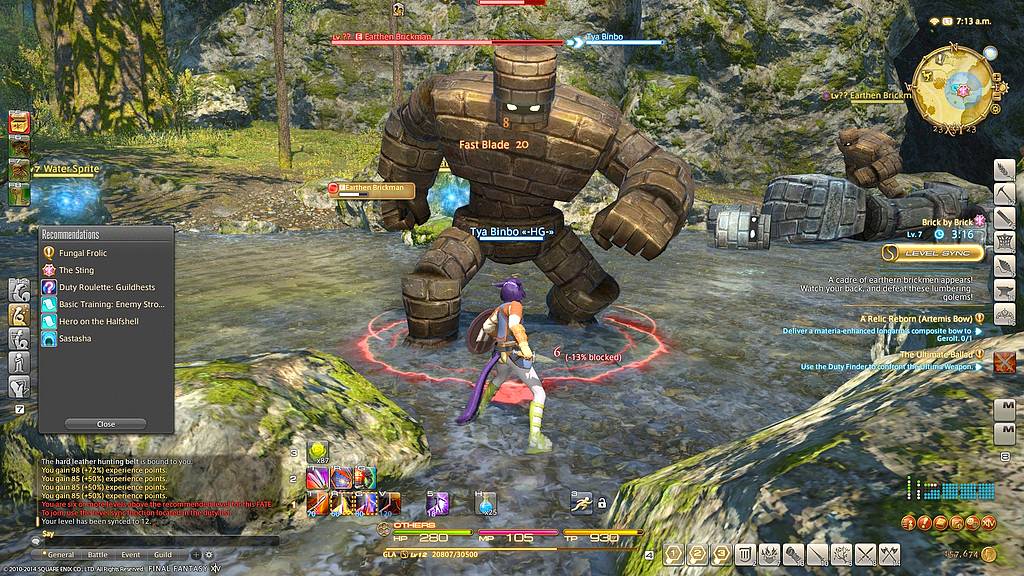 Of course I was immediately challenged on this viewpoint. I should have known that my idle morning thoughts, the time of day when I’m most creative and least filtered, would be the worst things to say in public, especially when completely devoid of context. In my head, there’s a long backstory to that tweet, but all anyone else saw was the tweet.

Herein I will try to elaborate on what I meant, and why I should not be lumped into the same category as all the unwashed masses of “the game is dying!” people. :)

To be clear, I like FFXIV a lot. I think it’s the best MMORPG out there, the best graphics, the best combat, and the best systems, the three things that are required for any modern MMO to succeed. Also, arguably, the fourth and most important thing, far more important than anything done by the developers: The rabid mob of a fan community who will blindly defend anything no matter what, long after the rest of the world has moved on. There’s really only two MMORPGs to pick from now in this top-tier space that check all four of those boxes: WoW and FFXIV. There’s some others that might also qualify, like Elder Scrolls Online or maybe Black Desert, but those are the top two for sure. Most other MMORPGs have only niche appeal in 2021.

So we’d like for these top two (or however many) MMORPGs to stick around forever. But I worry a lot that FFXIV’s game engine is stagnating, or has already stagnated. By “engine,” I mean the software platform and infrastructure that it runs on. It’s the same code base that started way back in FFXIV 1.0, circa 2010. Or possibly even earlier, because I’m sure it has roots in Final Fantasy XI.

So whenever there’s a new FFXIV expansion, like Endwalker, I look for signs that they’re upgrading the engine to last into the future. I didn’t see any of those signs in Shadowbringers, and I don’t see any in Endwalker. Not yet, at least. It’s still early, I suppose.

As a software developer myself, that fills me with dread. All software eventually exceeds its original design specifications, and must either be upgraded to support newer requirements or abandoned. There’s a concept developers love to talk about called “technical debt.” Basically it means, unless you actively spend development time to avoid this specific problem, there comes a point where you simply can’t feasibly put new stuff into old software. (See: Lord of the Rings Online.) The manager-types dealing with these sorts of problems usually set a personal goal to retire before it blows up in their face.

So FFXIV has two choices, as I see it. The same two choices that every MMORPG must make if they somehow miraculously survive more than a year beyond launch day: 1) Follow the EverQuest model and limp along with a static, unchanging platform as long as they possibly can, delivering tiny incremental changes but mostly just new art assets and quest text every expansion. The diehard community will (hopefully) eat up every expansion and defend it to their dying breath, but the game will never get any new players, and they’ll slowly lose their audience until they eventually have no choice but to turn it off (a la Asheron’s Call). This is the easy path, the path of least resistance, but it’s also gambling that a competitor’s game won’t appear and fill the same niche and do it better. (Fortunately, there’s little chance of anyone else filling the FFXIV niche anytime soon.)

Or 2) Follow the WoW model and continually re-invent the platform with every expansion. People will be constantly upset, they’ll lose diehard fans of the “old ways,” but they’ll always gain new players who can jump onboard for the ride and start anywhere, anytime, resulting in (hopefully) a perpetual steady state and a “fresh”-looking game indefinitely. This option requires a considerable amount of development effort and planning to make it happen, which translates into spending a lot of dollars. This is the hard way. I don’t play WoW very much, but I have great respect for Blizzard’s commitment to continually innovate their product on a technical level.

There’s also a third option, and it’s the one I personally hope Square Enix is working on, because they are one of the only MMORPG developers big enough to fund it: A new MMORPG. One to replace FFXIV, as FFXIV replaced FFXI. One that hopefully throws out all the technical debt that FFXIV has accumulated, and starts anew.

P.S. This is when I’m kind of glad I haven’t implemented comments yet, because this is one of those posts that might inspire a lot of strongly-worded letters to the editor, along the lines of: “My favorite game is not stagnating!”