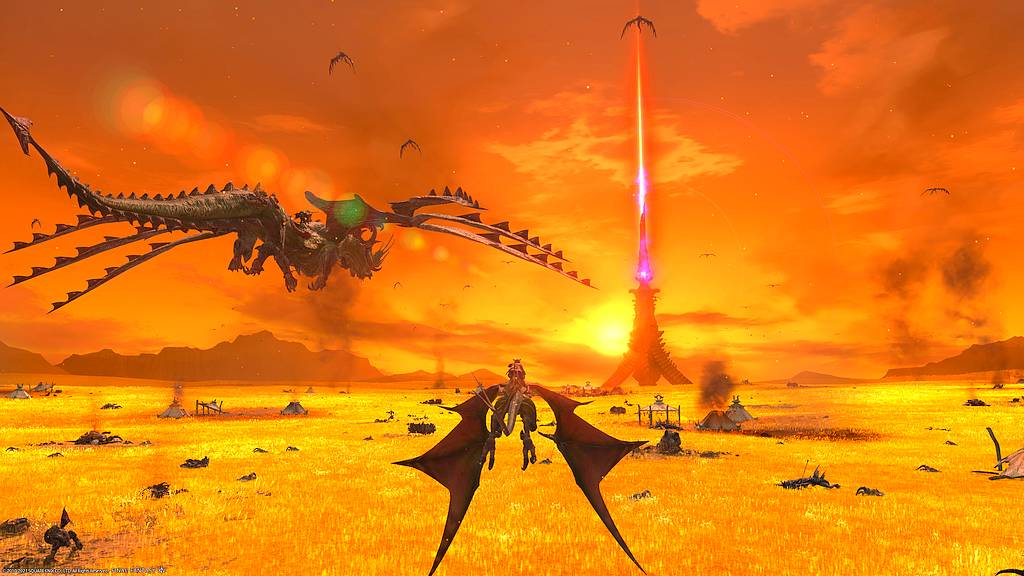 Oh hi. Remember when I was going to finish posting these before Endwalker? Well, it doesn’t matter, because nobody can play Endwalker anyway. Their entire antiquated server infrastructure imploded overnight. The only people playing are the ones who can log in at 6 AM and avoid idle timeouts all day. I imagine it’ll be at least a month before it settles down.

I myself have completed a whopping two quests in the Endwalker story so far (the “we’re on a boat” one and the “we’re touring a new city” one). It turns out I experienced a sufficient amount of Final Fantasy XIV with Shadowbringers a few months back, and don’t feel like playing, even if I could play. I can discern almost no changes in the game between Shadowbringers and Endwalker with the first two quests.

Anyway, enough of that. Here’s the last Shadowbringers post.

Surprisingly short, there are only nine quests over the course of two patches. The fifth one sends you to a Trust dungeon and the last one is a Solo Duty.

The Scions are off to fight the Scary Dark Towers that have popped up all over the world. (You can actually see them all over the game world, which is pretty cool.)

Fordola’s back! One of my favorite character’s from Stormblood is sent off to see what’s going on at the Dark Towers, along with her pal Arenvald, one of the original Scions we met way back in the Waking Sands. They casually mention that the two of them have been going on adventures all this time, and annoyingly, don’t tell us anything further about that.

Then the Scions contact Hair Estinien to help fight Crazy Fandaniel’s Lunar Bahamut dragon primal. They decide to fight dragons with dragons, and free Tiamat, a big dragon that was imprisoned in Azys La for … reasons? I’d have to consult a wiki to remember that from Heavensward. It doesn’t really matter anyway.

Then Crazy Fandaniel’s dragon forces are spotted attacking the yellow fields of Paglth’an (a place I’ve never heard of before), and we rush there for a Trust dungeon, where we take down Lunar Bahamut with some hot dragon-on-dragon action.

If only every location was as colorful as Paglth’an, I might not complain so much about how dull the colors always are in Final Fantasy XIV.

Continuing in Patch 5.55, we’re saddened to see Arenvald was injured so much that he’s comatose. But we’re not saddened as much as Alphinaud, who for some reason is frantic with worry and somehow feels personally responsible. Fordola yells at Alphinaud to grow up and walks away. Fordola, the most awesome character in FFXIV, lives the fantasy we all wish we could: Yelling at Alphinaud.

There’s a shocking twist when Alisaie’s and Alphinaud’s much-talked-about-but-never-seen father arrives from Sharlayan and delivers a stern message of non-intervention in the war against Crazy Fandaniel, and gives the twins a cold shoulder. So daddy issues will surely be tackled in the Endwalker expansion, because everyone was clamoring for more backstory from Alphinaud and Alisaie.

Then there’s another shocking twist when we see Arenvald has recovered from his coma and lives but … gasp! … he’s in a wheelchair! It’s a fate worse than death! Or so they seem to be trying to say. What is up with Japanese culture?

Anyway, then we go beat the forces of Crazy Fandaniel in a very annoying solo duty instance in which we have to control a lot of different characters that aren’t ours and curse at the screen a lot because that’s not very fun and it’s a horrible way to end an expansion.

I don’t remember much of the details now, but after the battle, we’re supposed to go to Sharlayan, and that’s it until Endwalker.

Oh, and Zenos has a scythe now. A very important plot point apparently.

The last YoRHa Alliance Raid was a doozy. I don’t really remember it now, that was two months ago. Was it the one with the Red Girl? [Reviews video.] Yes, that was it. Great music, again.

I did it a bunch of times but I never got much of the gear. I just bought the regular Tomestone gear.

Unfortunately the YoRHa story didn’t quite end after the last raid, because it went into a weekly quest rotation, and I only did a couple of them before drifting away to play other games. I guess I’ll never know what happens with the dwarves.

I bought the Death Unto Dawn soundtrack, which is a “Blu-ray Music Disc,” something I had never heard of before. It’s a pain in the butt, and a terrible way to distribute music. The only device I had in the house that could even read it was my PS4, which had been unplugged for some six months or more.

Somehow I got a Japanese version, or at least a version where all of the MP3s have Japanese titles, which I didn’t really intend to do. But it’s got some six hours of Final Fantasy XIV music on it from patches 5.1 through 5.5.

But the main reason I bought it was for the wind-up Lyna minion, which is one of my favorite characters from Shadowbringers, who I felt was criminally underutilized.