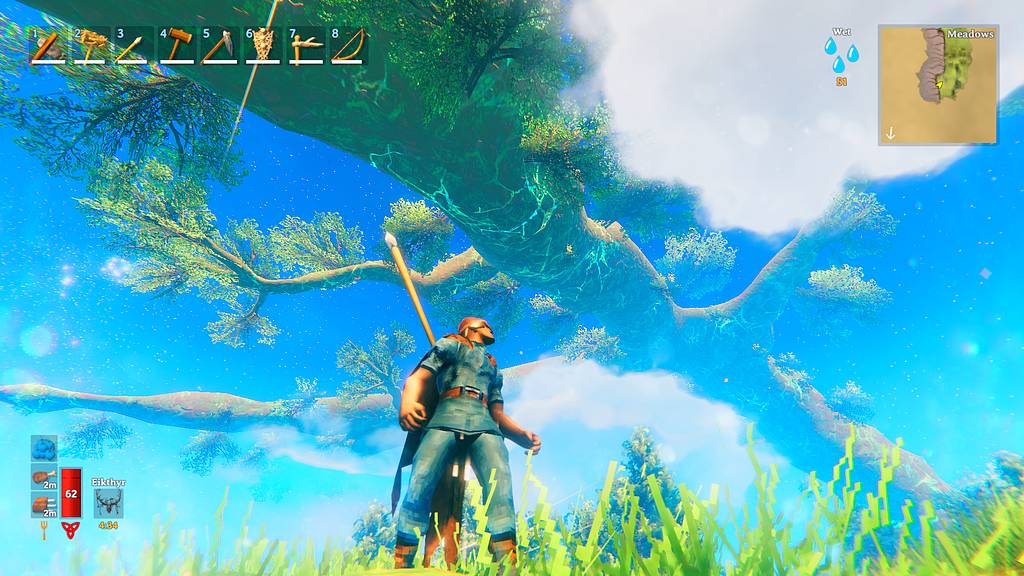 I decided to try out Valheim again.

The first time, I bought it, played for less than an hour, then returned it, wondering why everyone was raving about it. It seemed obvious to me that it was an average survival game that wasn’t finished. I don’t understand why it caught fire with the MMORPG community.

Some six months later, is it more finished now?

Nope, not really. It’s riddled with bugs and annoyances and quirky behavior. The character animations look like middle school art class projects. You can’t walk up even the slightest incline. You can’t hit anything if you’re standing on sloped terrain.

They’ve just done a supposedly major “Hearth and Home” update, but it doesn’t seem that major to me. They seem to be tinkering with whatever, following no plans or visions, blowing whichever way the wind and/or player forums blow, like a leaf on the wind and like most open source projects. Maybe it’ll get better, maybe it’ll get worse. Who knows?

But I can see why people like Valheim, especially fans of 1990s MMORPGs which had more bugs than features. The emergent gameplay of trying to brute force your way around the bugs, and the collective social bonding over dying to infuriating buggy behavior, was half the fun of 1990s online gaming. “Better in beta,” and all that rot.

The third-person camera is also a good distinguishing feature for Valheim, as compared to other survival games. I personally can’t play first-person games as much anymore without getting physically ill.

Anyway, I had a three-day weekend so I decided to give Valheim a more solid effort. I got through the first boss. It took two tries.

The first time, I severely underestimated how much damage that electrified deer would do to me, and lost all my stuff. (I, of course, did not consider the possibility that I might lose to the boss and was carrying everything I owned. Fortunately your stuff never disappears, even if you die multiple times, or don’t come back for 60 days.)

After dying, I discovered the boss doesn’t go away after you summon it, and I got stuck in a death cycle, because I built my “forward operating base” a little too close and Eikthyr kept chasing me after each respawn. Eventually I got far enough away that I was able to regroup and rebuild. For future reference: Bosses have a massive aggro radius.

Tipa told me on Twitter I had to go to the Black Forest to get Troll armor before I could fight the first boss, so, being an obstinate gamer, I took that as a direct challenge to not do that. :) Besides, Hugin the friendly bird warned me not to enter the Black Forest until after I killed the first boss. And even though I died the first time, I whittled the boss down to half its health, so it seemed possible to defeat it, with slightly better dodging and blocking.

The second time, I had figured out how to upgrade my workbench to level 2 (not intuitive, ahem) and brought deer leather armor and a tower shield to block a little better. So after dodging its straight-line lightning bolt attack, the one unavoidable ground stomp only did a couple points of damage with the shield up. Then I chipped away at it with a flint knife until he was dead. (I forgot to make a flint spear the second time.) Easy peasy.

After that, I started wandering around the Black Forest wondering how to progress. I’m sure I can Google a checklist of things I’m supposed to do to advance, but I still cling to this weird idea that games should explain what the player is supposed to do. The last thing Hugin told me was to “explore the Black Forest,” so presumably I’ll stumble upon the next breadcrumb eventually.

I’d estimate that up to 90% of the time I spend in Valheim is “down time,” that dreaded condition that used to be so common in online games, where you’re not doing anything except traveling from point A to point B, or farming resources to make something, or methodically searching a large area, with nothing to do but think about all the productive things you could be doing with your life if you weren’t stuck in front of the computer holding down the “forward” key. Don’t even think about playing this game unless you’ve got a big stack of podcasts or audiobooks or television shows queued up and ready to listen to.

Anyway I’ve found copper and tin in the Black Forest, and mined a fair bit of it, but Hugin told me I need a smelter to do anything with it. Naturally the game hasn’t informed how to make a smelter. Again, I assume I could Google this, but the “correct” way to play this game, according to what it’s presenting to me on the screen, is to wander around hoping to stumble into the next arbitrary threshold beyond which I’ll be given the knowledge to make a smelter.

Tipa mentioned Trolls in the Black Wood, but for the longest time I never saw anything but dopey Skeletons and annoying Greydwarves. But I finally found a Troll yesterday. It’s big and intimidating! But it has a slow heavy attack that you can consistently dodge and avoid all damage.

But … as soon as I assessed its basic attack pattern (it has precisely one), the moment I thought to myself, “Oh, this is easy,” a gaggle of greydwarves rolled up out of nowhere and ruined everything.

Greydwarves, you see, run around in chaotic patterns and never stand still, making them daunting foes in groups. And they throw things at you from range. So timing the dodging of a circus troupe of greydwarves and a massive Troll club at the same time became rather difficult. And also I was on a slope so movement was extra challenging, because for reasons that can only be to punish players and keep them from having any fun in their game, the developers made it so you can’t move up even a slight incline without sliding back down.

I had to run back to my base if I wanted to survive. Of course the Troll followed, where it proceeded to smash the palisade walls. I climbed up on top of my house inside to pelt it with arrows, then it did that massive club AOE attack that smooshed me from all the way outside the walls.

Then I spawned a million miles away at the original starting point of the game, because it turned out the troll had destroyed my bed inside the house while it was bashing on the palisades. It didn’t send me to the next-closest bed, but that stone circle starting point. Super lame and annoying.

And that’s basically all there is to Valheim: The crazy stories that come out of unexpected adversity. It makes up roughly 1% of your game time.

Anyway I went back and killed the Troll and unlocked all the Troll armor. It was a pain to make the Troll armor, because I only have one Tier 3 workbench way back in the first zone, back in the Meadows. It’s rather time-consuming to gather flint and especially leather scraps, so it’s a massive pain to upgrade more than one workbench without tons of running back and forth.

Don’t even get me started an the irritating resource bottleneck with leather scraps. They only drop from Boars, which are the rarest of all creatures in the Meadows, and you need them for everything, and you need a lot of them to upgrade a workbench to level 3. Spending hours wandering the Meadows hoping for Boars to spawn might be an accurate throwback to 90s gaming but is not my idea of a fun game design in 2021.

I don’t understand why nobody rattled off these long, long lists of problems with Valheim back when it came out. All I ever heard were good things. There’s a deep state conspiracy to suppress the truth about this game, for reasons I still can’t comprehend. There are some good things–the landscapes are fairly pretty–but there’s a lot of bad things, too.

For example, a teeny tiny bump on the ground will physically block your character from walking over top of it! What is that? I’ll tell you what that is: A bug. And an annoying one at that. Especially in the middle of melee combat when you have to dodge to avoid attacks, but some tiny little bump on the ground behaves like a brick wall. It’s a bug that should be fixed immediately in one of these patches that come out every other day, but mysteriously hasn’t been.

Getting killed because of weird terrain collision issues is one of my top pet peeves in gaming, and Valheim seems to have been specially designed for the player to get stuck on terrain a lot.

And the building system? It’s almost impossible to get two consecutive pieces of wall to snap together. That’s not normal. In ARK, you click-click-click and have a house in seconds. In Valheim, it’s an epic struggle of man versus nature to make a corner. It reminds me of Landmark, which incomprehensibly made their building system for industry 3D artists instead of casual players. In Valheim, they seem to think that I’m going to want to build a log cabin one log at a time for fun.

Still, Valheim isn’t bad. It’s just not finished. But for $20, you too can enjoy the constant frustration and time-destroying tedium of average 1990s online gaming.