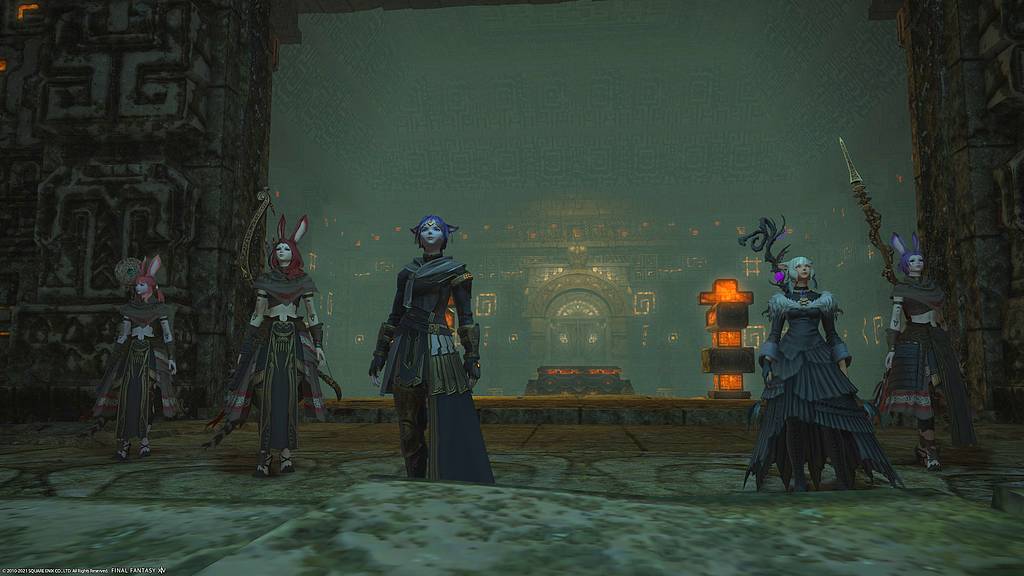 Another ten quests to get through. These post-Shadowbringers patches are big and meaty, unlike what I remember of the first couple of post-Stormblood patches, which I remember as being fairly inconsequential. (No, I still haven’t fixed the images on older posts yet.)

The bodies of the Scions back in The Source are still deteriorating, even faster now, so we have to hurry up getting them back. So of course we’re soon distracted from that task again.

Instead, we start working on clearing the name of poor Ardbert, the First’s much-maligned Warrior of Light, who’s reputation was ruined. Then, much to our surprise, Ardbert himself strides into The Crystarium and declares that he needs all the people of the First to rise up and become Warriors of Light like him.

Long story short, it’s not Ardbert (whose soul has actually merged with the player’s soul), but that last pesky evil unsundered Ascian Elidipus in Ardbert’s guise, because of course it is.

After a quick trip to the Tree Village of the Bunny People for a fun adventure with the Bunny Sisters, we end up going back to another underwater ruin in The Tempest to research the Ascians, with the help of everyone’s favorite flying whale. This results in a moderately interesting dungeon run, the first part of which has the dungeon going past you while you stand still, which was a neat twist.

When we get back to The Crystarium, Elidipus causes meteors to fall from the sky and everyone hears the voice of Hydaelyn speaking to them and it’s all a grand spectacle with earth-shattering implications. Unfortunately you have to be a hardcore Final Fantasy nerd to understand even a little bit of it.

From a practical standpoint, the only thing that matters is that Elidipus is bad and we need to stop him. But not in this patch.

There’s a couple of new quests, but no new raids. The wacky dwarves of Komra are getting ready for a carnival.

There’s a new set of four raids but I didn’t do any of them. I played through the opening quests to unlock the first one, then walked away. I wasn’t all that enamored with the new character Pouty McPoutyFace, so I guess I’ll never know what becomes of Ryne, and Thancred and Urianger will forever remain in a time paradox, stuck in The First.

The main scenario quest directs you back to The Locks of Gyr Abania, where you unlock a Trial. The game sort of implies that you have to do the trial to continue the story and save the world, but in fact you can ignore it (which is what I did, because I didn’t have the required item level).

But I went back and did this trial after I finished the 5.2 Main Scenario Quests. I jumped into a PUG and got through it on the first try.

I can’t say I was terribly invested in the story surrounding Gaius and his adopted kids, so I doubt I’ll do any more of this quest line. I don’t know Gaius and I certainly don’t know his kids, and I don’t know how any of it’s related to anything.

Without a compelling story, I don’t know why I’d want to do these Werleht Trials, other than just to say I did them. I suspect they drop weapons or parts for weapons, but with Endwalker almost upon us, one hardly need bother working to get new gear that will immediately be replaced.