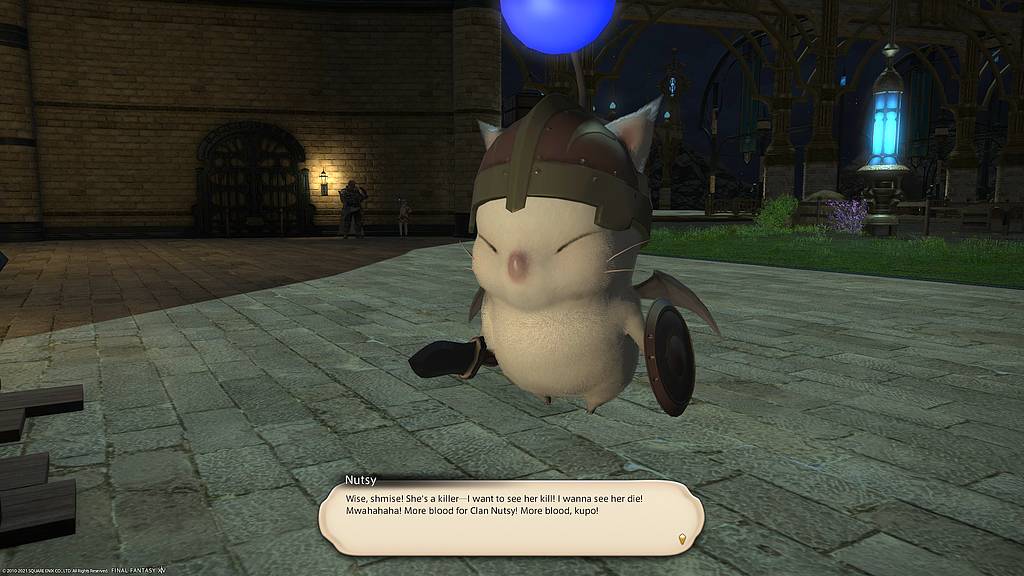 I started into the post-Shadowbringers Main Scenario Quest last night and got a whole two quests in before the game slammed a massive brick wall down in front of me.

Final Fantasy XIV is a great game. But holy wow it’s a drag sometimes. So much so that you just want to quit and move on to something else before you get sucked into the post-expansion gear grinding vortex. When staring at the potential for hours and hours and hours of mindless grinding necessary just to complete the next quest in the story, for example.

Some people like mindless grinding in MMORPGs. I dare say that the anecdotal evidence I’ve seen suggests that most people like mindless grinding in MMORPGs. It seems to be the exact thing that people enjoy about MMORPGs: The part where, after a hard day at work, you can just turn your brain off, put some dumb show on Netflix to have some noise in the background, then click your hotbar abilities for hours on end on auto-pilot, then note your numerical progress in a spreadsheet somewhere so it feels like you’re actually accomplishing something. (I have done this exact thing many times.)

Currently, I myself am of the mindset of just wanting to log in, play through some fun story quests for an hour or so, then log out again, and pay zero attention to my experience points, gold, gear, tomestones, or any other endgame currency or progression metric of any kind. Shadowbringers worked great for that. Post-Shadowbringers definitely does not, and this remains one of the biggest failings of Final Fantasy XIV to this day.

Coming out of the Shadowbringers Main Scenario Quest my item level is 414. The first story dungeon you hit post-Shadowbringers is Grand Cosmos, which thankfully still works with the auto-leveled Trust companions. But it requires item level 430. I got the level 430 Weathered gear from the underwater guy at the end of Shadowbringers, but I’m missing a belt and accessories, which wrecks the average.

I first thought I might try re-running the final story dungeon (Amaurot) with my Trust group and see if I could farm for some jewelry, but post-Shadowbringers you immediately encounter what I would consider to be a rather significant problem with the Trust system: All your Trust companions, who previously could go into any story dungeon at any time, suddenly revert to level 71 and can’t go anywhere except Holminster Switch. Now I can only use them for the most current story dungeon, apparently.

Next I thought I could unlock the first Alliance Raid and go there, because I vaguely remember doing that in previous expansions. Unfortunately my memory was faulty, because the first Alliance Raid requires item level 435, so that didn’t help me at all. (Also, as I’m writing this, I now recall you only get armor from those raids, I don’t think you get jewelry.)

Anyway, to make a long story short, I spent a lot of time running around to various vendors trying to discern a tolerable path forward. Sure I could read a guide, but what fun is that? Also guides are so often wrong that I rarely bother anymore. The first search results are always the ones written years ago that they just rush out the door so they get to be the first search result, and they never update them, and they were usually filled with misinformation from the beginning (*cough* IGN *cough*). Not to mention the infernal spamming of ads. Also the guides typically point you to the most efficient path forward assuming you want to play with PUGs and guilds and people and whatnot. I don’t particularly want my games to be social networks. I don’t even want my social networks to be social networks.

Anyway, here were my practical findings, the best paths forward for me:

I figure if I can just get to where I can run the Alliance Raids, I’ll be able to farm enough of the tomestone currency du jour to keep up with doing the rest of the story. In the past I recall running a lot of the Alliance Raid duties, which were pretty easy (just incredibly time-consuming and soul-crushingly boring). Alliance Raids are the closest thing that Final Fantasy XIV has to Rifts in RIFT, or world boss events in Guild Wars 2. (FATEs still seem to be completely dead for the player population, another tragedy they don’t seem to care about fixing.)

Indeed, the Level 3 hunts are easy, and reward a total of 75 nut bags daily. Having done them, I now recall doing this before to gear up immediately post-expansion, perhaps the only time they’re worth doing. The weekly Elite hunt was also solable, and rewarded 100 nut bags. That allowed me to buy item level 440 Ronkan earrings, necklace, bracelet, ring, and belt, which got me to item level 432, enough to continue the Main Scenario Quest. I was left with 50 nut bags, which was 5 short of what I needed to buy the next tier item level 460 Deepshadow ring, so I did the Level 2 hunts (which reward 4 nut bags each). Then I was able to buy the ring and get my item level to 436, enough to get into the Alliance Raid.

No quitting or dungeons needed after all! For now, at least.