A couple of “flycatcher” birds returned this year to nest outside my back door. (I don’t know their exact species but I think they might be Eastern phoebes.) I watched in fascination as four little baby birds grew up in the nest this Spring. I took tons of pictures of them. I setup a streaming webcam so I could watch and listen to them from my computer room. (The parents would chirp and scold me if I stood at the door to watch.) I even figured out how to stream an image from my DLSR camera fitted with a telephoto lens. 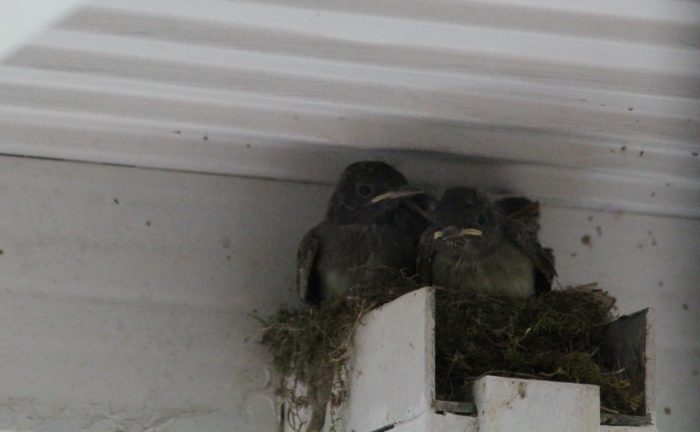 As the babies got bigger, my cat Gracie (a stray cat that arrived last year) got more and more interested in the nest. I tried to keep her indoors as much as possible, and shoo her away from lurking around the back porch while she was outside. Part of the reason I setup a webcam was so I could keep an eye on things if the cat was outside, without having to stand at the back door all the time.

Early Tuesday morning, Gracie bugged me to let her outside so I did. I counted four baby birds in the nest, quiet and settled. Gracie immediately jumped up on the porch railing so she could sit directly underneath the nest, a spot she had grown fond of over the previous few days. I shooed her away and she wandered off. I started to think about setting up the webcam for another day.

I went back inside, got some coffee, then I got distracted with my computer for about 15 minutes. I realized I had lost track of time and hurried back to the door to check up on things.

I found a horror show.

The nest was empty. The nightmare scenario happened: The babies were out of the nest and my cat was outside. I knew immediately that something was horribly wrong because the bird parents chirped madly and flew to and fro around the back porch. I ran outside and found Gracie with one of the babies on the grass nearby. I grabbed the cat and threw her back inside (in retrospect I’m lucky she didn’t scratch my arms to shreds because she hates to be picked up).

That baby on the grass did not move and remained limp. I saw the parents landing nearby and chirping at it, but it did not react. It did not react when I approached to look at it. I’m sure it was dead.

I searched around the porch for the rest of the babies; three were unaccounted for. The parents chirped and hovered, so I knew they must be nearby. I found one other baby sitting on the ground on the opposite side of the porch, apparently unharmed. I got some gloves and thought to try to pick it up and put it back in the nest. As I approached, the little guy flew away into the trees, so I breathed a sigh of relief.

I did not find the other two babies so I’m assuming they flew away as well. I had watched the babies flapping and testing their wings in the nest just the previous day.

I was sick with anger at my cat. I’ve never been more angry at a cat in my entire life. I felt like she had betrayed the trust I’d put in her. Of course I was really angry at myself for leaving her unsupervised for what turned out to be too long. Cats are predators, no matter how adorable they are.

I don’t actually know what transpired in those 15 minutes I was distracted. Part of me hopes that the babies just happened to choose that moment to try to leave the nest. But that’s probably not what happened. Gracie probably got back up on the railing, then jumped up and knocked or scared the babies out of the nest so she could get at them. It would have been an easy jump for her. I had worried about that exact scenario for days.

I’m so embarrassed and ashamed and mortified and sick that my brief negligence has probably killed four little innocent baby birds. One for sure, and three maybe because they were rushed out of the nest too soon and not prepared for the world. They might be out there struggling to survive while I’m typing this, maybe starving to death because they don’t know how to hunt for food on their own yet. (One day earlier they relied on their parents to bring them food.)

I didn’t want these flycatchers to build another nest in my back porch after this one, because they are bit messy, but now I hope they come back because I really want to redeem myself to them. I read that the same birds will come back to the same nest year after year-if they are successful in raising their babies there. They’ve had a pretty traumatic loss here so I doubt they’ll ever come back now.

I gathered up the little dead baby bird in a plastic ziplock bag and put it into the trash can. I had to pull it up from the ground because its little feet clutched at the grass. I am very sure it was dead, because it did not move or make any noise. I am embarrassed to say that I cried a lot. I haven’t cried like that in a long time. I was a lot more emotionally invested in this bird nest than I would ever admit to another person. I felt like I had let down those parents and the whole universe. That was my one and only job: To keep my cat away from that bird nest, and I failed at it utterly, because I got distracted and couldn’t stay focused on the task at hand.

A little later I noticed the parents were still hovering around the back porch. They landed on the gutter over the garage and chirped. It happened to be right over the trash can. I got it into my head that their baby hadn’t been dead but merely stunned, and the parents knew their little baby was suffocating to death inside that ziplock bag in the trash can. I ran back outside, dug out the ziplock from the trash can and opened it up. The baby was definitely dead. If it hadn’t been before, it definitely was then.

I don’t think I killed it. I’m pretty sure my cat killed it. Actually I’m not sure at all anymore. Now I’m only about 50% sure it was dead when I put it in that ziplock bag. What if I killed it? What if it had only been playing dead when I chased Gracie away? What if it could have flown away and had a chance to live but I robbed it of that chance? I can’t stop thinking about that.

I put it back in the ziplock bag and back in the trash can. There was nothing I could do about it then, whatever had happened.

A little while later I spotted the parents still hanging around the back porch, chirping and searching. Then a new thought clawed its way into my head: What if they didn’t know their little baby was dead? What if they thought it was still alive somewhere? Maybe they’d accounted for three of their babies, and couldn’t find the fourth. How would they ever know for sure what happened to their fourth baby?

So I dug out the ziplock bag again, took out the dead baby bird, and set it out where the parents could find it. At least maybe they could get some closure. It is ridiculous to think that birds have those kinds of advanced emotional responses, but it was honestly more for me than for them. I stood at the back porch for a long time hoping I would see the parents fly down and check on it, but I never did. I saw one of them land on the bell by the back porch, which is where they always landed before flying up to the nest with food. Instead of going to the nest, or down to the corpse, it flew away into the woods.

About an hour later I put the dead baby bird in the ziplock again and back in the trash can. Ants had started crawling over it by then.

Last year the flycatchers raised three babies in this nest. When they finally left, I felt empty for days. I got really attached to watching the progress of the nest every day, and saying hello to the little guys every time I walked by. I even had to help the last of the three babies leave last year. The last one’s little foot had gotten tangled in the nest, so I had to pull it free before it could fly away. I don’t know what happened to it after that.

I’d like to think of this incident as a “tragedy” but I feel like tragedies are accidental and unpredictable. This was entirely my fault and easy to predict that it would happen. All I had to do was stay at the back door and watch to make sure Gracie didn’t get into trouble, but I couldn’t even manage that simple little thing.

Last year I felt empty after the nest emptied, but this year I feel like all of my insides have been torn out and the world will never be right again. I’ll be okay tomorrow I guess, and hopefully learn something from this colossal blunder, but today, I am grief-stricken, and I need to figure out how to forgive my cat for just being a cat, and forgive myself for letting down these poor birds so much.