Join me as I re-watch The Expanse, Season 1, to try to find out where the show went wrong for me.

I’ve decided that I’m just going to quote Wikipedia’s brief episode summaries here, instead of spending all of my time writing my own summaries. The point of these posts is to explore what I think of the episodes, not retell the episodes.

The Big Empty was written by Mark Fergus and Hawk Ostby, and directed by Terry McDonough. I am noting the writers and directors, by the way, to see if I notice any patterns in which writers or directors create the episodes I like or dislike.

From Wikipedia: “On Ceres, Miller investigates the theft of water, now severely rationed due to the Canterbury’s failure to arrive. In Julie Mao’s apartment, he finds clues placing her aboard the Scopuli. On Earth, Avasarala sends the suspected OPA captive to Luna after her superior, Undersecretary Sadavir Errinwright, disapproves of “gravity torture”, but the captive commits suicide. In the asteroid belt, the Canterbury’s shuttle is damaged by debris from the ice hauler’s destruction. Using the last of their air, the survivors build an improvised antenna to place a distress call, which is responded to by the Martian navy flagship, the MCRN Donnager. After Nagata identifies the distress transponder aboard the Scopuli as using Martian military technology, Holden broadcasts a message to that effect to the Solar System, as insurance against being killed as inconvenient witnesses.”

I am also going to link to Tor.com’s more detailed episode recaps and reactions, because I often read them myself (their recaps, and others like them, inspired this series), though I don’t always agree with them: The Expanse: “The Big Empty” Focuses on Character Rather than Action | Tor.com 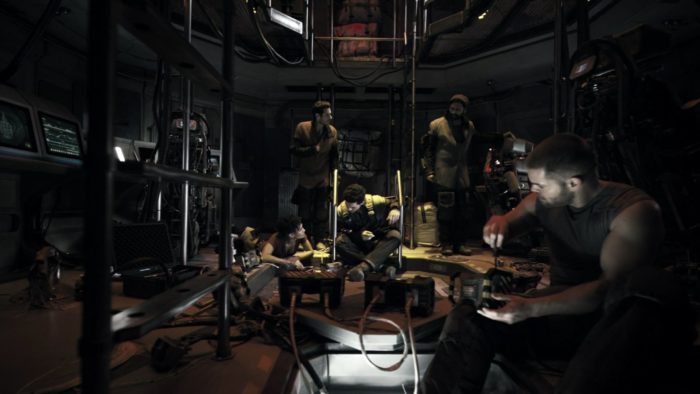 The survivors on the shuttle Knight: Naomi, Shed, Holden, Alex, and Amos.

Overall I would characterize this as a solid episode. It was a bit of a letdown after the strong ending of the first episode, as I expected it to continue strong, but instead it only continued, well, “solid.” It’s a measure of just how much of a visceral punch the final scene of the first episode was when I felt a letdown from a “solid” episode.

Still, I enjoyed the survival story of Holden and company trying to avoid dying in the shuttle. The tension was high because, since we’re just starting out in this show, we have no idea who the “untouchables” are, so everyone feels like they’re in peril. The shuttle scenes definitely set the tone for a show about “hardcore” science fiction, where space is dangerous and any number of things could kill you at any moment. This is not your grandma’s science fiction, where you just push a few buttons and warp to a new galaxy.

And for that reason alone, I rate it better than the first episode, and one of the better episodes of the season. Add to that some solid character-building amongst Holden’s ragtag team and you’ve got a pretty good episode here.

One glaring misfire for me, though, is that this episode doesn’t do anything to endear Holden to me. I can’t believe I’m saying this, considering how I feel about his flat performances in Season 3, but Holden is a bit of an emotional wreck and a hothead in this episode. I’m reminded of a child trying to act like an adult. The rest of his crew is right not to trust him, especially after he reveals to Naomi that he is the one that forced them to investigate the distress call and ultimately got the Canterbury destroyed. He seems to have forgotten all about Ade during this hour.

Miller is the one showing all kinds of likable character traits in this episode, letting a water thief go instead of busting him. We will see that kid Diogo again later. Miller and Havelock’s storyline in this episode shows the class warfare on Ceres Station very well. It’s interesting, but still felt like backstory and I’d rather move things along. I’m still want to find Julie Mao floating in that spaceship from the prologue.

There weren’t very many highlights in this episode. Like I said, it was just a solid, workhorse of an episode, with very few peaks or valleys.

I laughed when Naomi said, “I’m sorry, does anyone need a back rub first?” Naomi is at her best in this episode, taking charge of the situation, and in her element. 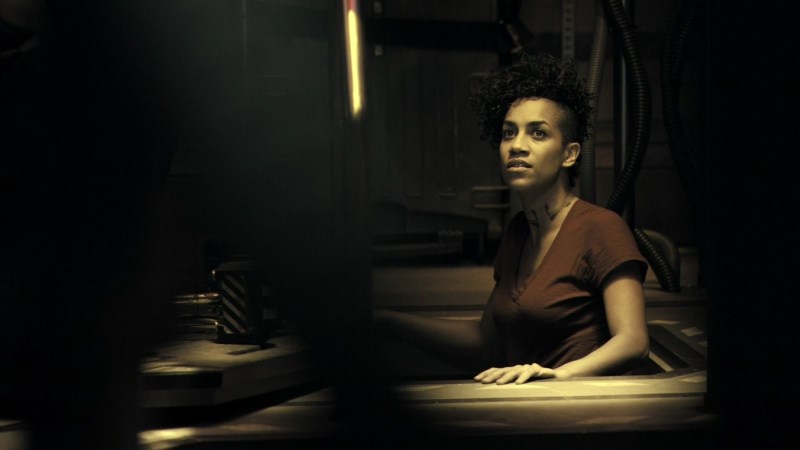 “I’m sorry, does anyone need a back rub first?"

I also liked Miller’s partner’s zinger in the Ceres administrator’s office: “Maybe if everyone in Ceres had this view, they’d respect you more.” It earned him a cactus plant from the administrator.

I did not buy it when Holden “dropped” his wrench and it went flying off into the vacuum of space. The way it was shot, it made me think the wrench should have simply floated there next to his hand until he recovered it, because it would of course have the same relative velocity in the vacuum of space. Instead he let go of the wrench, and it looked like it was pushed away by some unknown force, as if they were flying through an atmosphere. It stood out in a show that is going out of its way to tell us it’s trying to “get the science right.” It was another situation that was, perhaps, explained in the book, but visually it made no sense to me, and I was left feeling like the show “made a mistake." 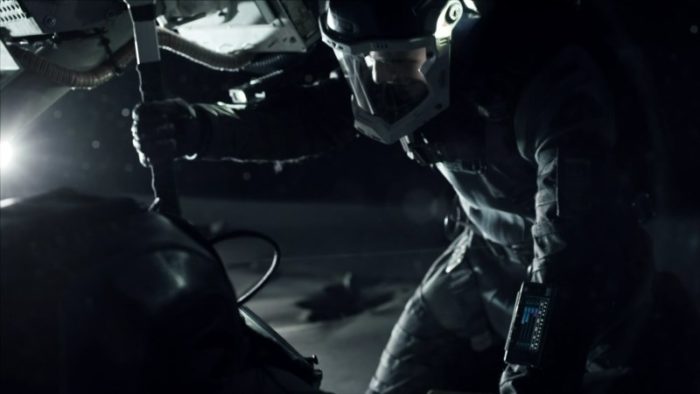 I don’t understand why this wrench flew away when he let go. I mean, besides the wire they forgot to remove.

They pulled the old “he’s dead and we gave up on CPR but then he woke up a few seconds later anyway” trope, which earned a groan from me.

Miller learned that Julie Mao had a fractured relationship with her rich father Jules-Pierre Mao, someone we will learn much more about in the second and third seasons. She left Ceres Station on the Scopuli, but Miller isn’t aware of the distress call or the incident with the Canterbury yet. It lets the audience know that Miller’s case and Holden’s experiences are connected somehow, although for myself, the connection seems really tenuous and most of the time, I’d rather be following Miller’s investigation, as I am a sucker for mysteries.

Naomi found that the distress beacon planted on the Scopuli to lure the Canterbury was made from Martian military technology, leading us to think that Mars is responsible for the Canterbury’s destruction. I had to re-watch that scene to puzzle out how they leaped to the conclusion, because they glossed over that little factoid really fast. They didn’t show very well that a) Holden and company had removed the distress beacon device from the Scopuli, b) they brought it with them on the shuttle, and c) Naomi took it apart to see who made it. Zooming past important plot details is a recurring theme in the show. I criticize the show a lot for telling instead of showing, but sometimes you have to tell the audience things, and if it’s important, it should really be highlighted.

I am learning to like the Miller character just from watching him build a strange relationship with this missing girl that he knows nothing about. He is bonding more with the person who is not there, than with the people on the station with him. He is the stereotypical gruff-exterior-but-sensitive-inside character, and this is an archetype that I know well and understand.

Holden’s archetype, on the other hand, continues to elude me in the second episode. I don’t know what to make of him, and I can’t predict how he’s going to behave. His decision to send out an “open letter” to the entire system about the Canterbury seems completely irrational in the moment, an ill-conceived plan that only succeeds by luck. (I am not entirely sure that it did succeed, actually-other events interrupted how that story would have played out.)

We learned that Naomi is a take-charge, natural leader, and there’s probably a lot more to her than meets the eye. It’s her first episode to shine, and I like her a lot more than Holden.

Amos seems like a remorseless amoral killer, but for some reason is completely loyal to Naomi. He says casually that he would have had no trouble throwing Holden off into space, or shooting him in the back of the head while he sent his message, if Naomi hadn’t stopped him. I don’t yet know what to make of him, but he makes me nervous.

Back on Earth, we learned that Chrisjen is “two heartbeats away” from running the government, but we still don’t quite know what her role is. It’s very mysterious, but it clearly involves intelligence work. She worries a great deal about Mars allying with The Belt against Earth.

We are introduced to the Undersecretary General Sadavir Errinwright in this episode, though he doesn’t have much of a role except to explain that the “gravity torture” that Chrisjen used on the OPA operative isn’t cool.

I’m going to try to rank the order of the episodes that I liked. In a perfect world, the rankings should end up in the reverse order of the episodes, because ideally, with a serial series like this, you would want the audience to like each successive episode more than the previous one. We’ll see how it turns out, and I’ll be interested to compare my rankings with the rest of the Internet.