I’m trying an experiment: I’m going to try not to completely abandon the novel I wrote in November.

But this time I have a plan. Well, a first step in a plan, at least, which is better than I’ve ever done before.

My first goal is to go through the entire draft and highlight sections of text based on certain criteria. Here is an image of the actual Scrivener project I am working on above demonstrating this highlighting. (I blurred up the text because it is too embarrassing to show the world.) 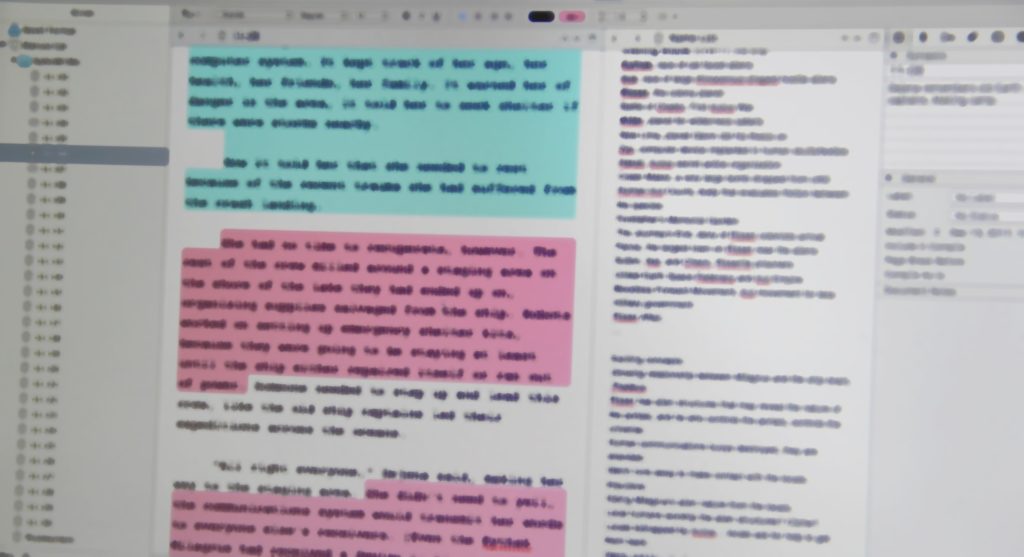 First I went through the text and highlighted every paragraph which contained backstory of events that happened prior to the story, or exposition about the world and setting. I highlighted those sections in blue. There was a lot of it, but I was pleased to see that it wasn’t as bad as I feared.

There was a strong correlation between the days that I didn’t feel like I knew what to write and the days where I highlighted a lot of backstory in blue.

This process went very quickly, and I completed going over the entire project in about an hour.

Some backstory will be necessary of course, but I want to make sure it is in the right strategic places. The first chapter, for example, is not a great place for large swaths of backstory. The movie version of my novel will not start with a black screen and a bunch of text explaining everything you need to know before you can enjoy the movie, like so, so many movies do. (And video games, for that matter.) Instead, hopefully, it will begin with likeable characters doing something intrinsically interesting. I personally give movies on Netflix or Amazon Prime about a minute or two before I decide whether to keep watching or not, so I am trying to keep that in mind when I write my novel. Readers will give me a page or two at best, so I can’t junk it up with pointless backstory. (Not even counting agents and editors, who might give me a *sentence* or two.)

During this first pass, I also marked up any sections where I “broke the fourth wall” just to get filler words into the draft. I used the “strikethrough” text format for that.

In my second pass through my draft, I am working to highlight all of the text which sounds like “telling, not showing” in red. (Red for “danger,” get it?)

This is a fairly subjective measure. It’s easy for me to tell the difference between backstory and current story, but this is taking a lot longer and requires more judgment calls. I have only completed highlighting the first eight days over the course of a couple of hours.

I am looking specifically for any text that basically just states outright what a character is thinking or feeling. “Dejena thought that was dumb.” Things like that. Again, it is largely impossible to eliminate “telling” entirely, but once I have all of the passages highlighted, I’ll be able to evaluate each one to see if it works as is, or if it needs to be fixed.

In a third pass, if I ever get to it, I want to highlight descriptions in green. I don’t expect to see very much of this, because when I write my first drafts, I very rarely describe anything or anyone. For one thing, the appearance of the characters has little or no bearing on the story, so who cares? And secondly, it tends to bog me down in distracting details. It’s very easy to fall down a rabbit hole for hours or days trying to figure out what a personal communication device might look like in five or ten thousand years.

So that’s what I’m working on.