At the end of this weekend, I should be around 50,000 words into The Sovereign of Tel. I hope to be finished with a decent first draft by the end of April. I am not completely happy with it right now, but I’m soldiering on anyway in the hope that I can patch it up in a rewrite.

My coolest achievement for the month is this nifty spreadsheet to keep track of my word totals. It does nifty gradients and everything. I set a 7,500 word goal for Monday through Friday, and originally I set a 5,000 word goal for the weekend, thinking I would obviously have more time to write. Well, perhaps counter-intuitively, it turns out, after a week of a day job and writing, I don’t seem to have the energy to write a lot on the weekend. So now I’ve shifted it back down to the regular 3,000 words. (I can’t remember where I read it, so I can’t give credit, but somewhere I read that setting a weekly word count goal might work better than a daily word count goal. So far it’s working for me.) 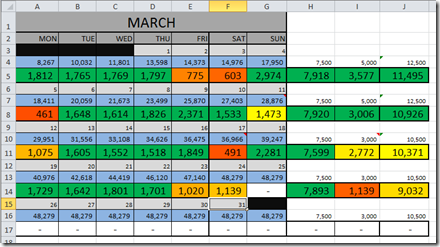 I have also planned out my writing schedule for the rest of the year, and hopefully every subsequent year. I will write a novel from January-April, take May off, then write a novel from June through September, then take October off, then do NaNoWriMo in November, and take December off. The idea is to write as many novel drafts as I can.

I did a more detailed outline because I wanted to find out if I work better as an “outliner” than as a “discovery writer.” Outline writers plan everything out beforehand and work from that. Discovery writers basically make it up as they go, and fix continuity problems in a rewrite. Thus far I’ve been more of a discovery writer, but I wanted to try outlining.

As it turned out, I still deviated from the outline. So I guess even with an outline, I still want to “discover” things. On the other hand, an outline is very useful for giving me at least a framework of what’s going on, and at least a fuzzy idea of where things are going. When you’re staring at a blank page, it’s really helpful to bring up the outline and re-remember what’s supposed to be happening.

So I guess I’m sort of a half-outline, half-discovery writer. It seems like I outline to the point in the story where things need to start getting resolved, and then I start discovering. It’s kind of a frustrating way to work, actually.