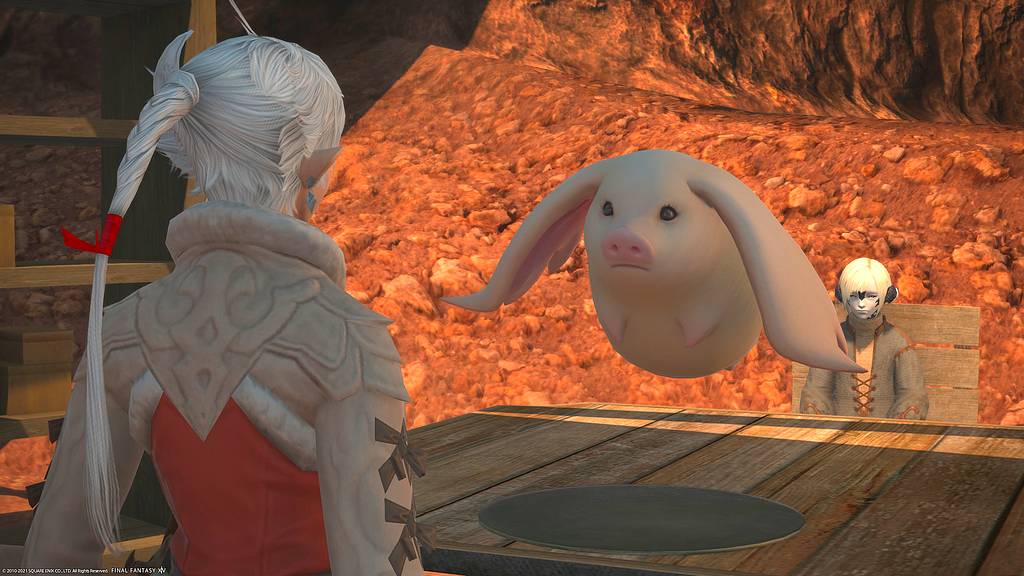 There are ten quests to get through. At first it seems like The Crystal Exarch is going to send the Scions back home–the very least he can do after kidnapping them and endangering their lives. (That’s a crime in most civilized societies.)

We enlist the help of one Beq Lugg to figure out how to transport souls and memories inside of crystals, and along the way, Alisaie manifests a magical flying porxie to help poor Halric. (The flying porxie quickly becomes a visual symbol of “the thing that fixes things we’ve never been able to fix before.")

But that storyline is put on the back burner to deal instead with a missing Chai-Nuzz and his civic duties in Eulmore.

I remember wondering what would happen to Eulmore’s societal structure after Lord Vauthry was gone, so I was glad to see them at least touch on the fact that somebody still had to run the city.

In real life, everything of value inside Eulmore would have been looted by the poor people to buy food, then there would have been a period of civil wars and famine and pestilence until the next strong ruler took over.

But in the world of Final Fantasy, they simply selected a good person to bring the noble principles of freedom and equity to Eulmore, everybody agreed on everything, everyone retained all their riches, and everyone lived happily ever after. Kind of unrealistic, but at least they tied up the loose ends.

The alliance raids have always been one of my favorite things in Final Fantasy XIV. There’s a low barrier to entry (after the Nutsy hunting, that is), they take a fairly predictable amount of time to do, so you can plan around them, they’re reasonably challenging in the early days, and you get cool loot that helps get to the next content tier. But best of all, as a player, you’re largely anonymous and invisible inside 24-man raids.

The Copied Factory, it turns out, is one of the easiest alliance raids I’ve seen in the game (admittedly I’m late to it, so everyone is now overleveled). Compared to The Labyrinth of the Ancients back in the day, it’s a breeze.

As for the crossover, it’s fine. By coincidence, I got Nier: Automata earlier this year and played about an hour before giving up (who wants to play Galaga again?). But these raids inspired me to go back and play a little more, so I guess the promotion did its job. Nier: Automata, the game, though, is not that great. But the music is amazing.

Tales from the Shadows: One Final Journey

I stumbled onto this touching side quest because Tataru, standing next to Krile (who has the first quest of 5.1), asks you to go check in on F’lhaminn, who typically sits by herself way off the beaten path.

It’s a really good quest, and shouldn’t be missed. I wonder how many other quests like this I’ve missed along the way? I’ll probably never know, because they’re not always so easy to find.

I don’t seek out side quests in FFXIV because there’s usually no reason to, unless the game tells me to do so with a blue “unlock” mark. There’s no way to distinguish “related to the main story” side quests like this one from “random errand for nowhere near enough experience points” side quests.

Technically, I did these after the 5.2 Main Scenario Quests, because I didn’t realize the raids were released in 5.01, and I should have done them first.

I wasn’t that interested in the raids, but I was curious what Thancred and Ryne were doing out in the desert, since they mentioned it at the end of Shadowbringers.

I thought this was a big indicator that Thancred and Urianger, at least, wouldn’t ever be returning to The Source. Because now those two NPCs have to be there forever in The First to deliver those quests. But alas, no, they just left a dangling MMORPG time paradox there.

I got through the raids in PUGs without much difficulty, I just watched a video beforehand and that was good enough to remember the surprise mechanics and stay mostly alive (the main role of a DPS in FFXIV, when it comes down to it, is to avoid getting killed). Except for the last one, where everyone died except the tank, who soloed the boss for probably a third of its health.

Somehow tanks are able to heal themselves, which is probably why everyone is pushing healers to do more DPS, because apparently they’re entirely obsolete. It was weird. I’ve never seen a tank self-heal so much for so long before.

As for the story, it was okay, but nothing special. I’m not that invested in the future of The First. :)

P.S. Yes, I already gave up on the audio thing. It introduces a lot of speed bumps into the blog posting workflow, so I’m going to save that for special occasions.