Speaking of Souls-like games, yesterday on the Steam Backlog Bonanza, I played a game that is frequently described as Souls-like: Titan Souls, from 2015. I got it in that infamous Winter 2016 sale, what turned out to be the last hurrah of Steam sales, for a whopping $3.74. I don’t remember why, except that I probably had a vague memory of seeing it described as a game that fans of Dark Souls would like. And it was super cheap.

As it turns out, It doesn’t look or play anything like Dark Souls. It’s an overhead 2D pixelated graphics game with exactly two buttons to learn: Dodge and attack. And movement, of course. And aiming, I suppose. I played on a controller, which is what it recommends.

Your little pixelated dude carries a bow and exactly one arrow, for some reason. It’s apparently a magic arrow, because after you fire it, you can retrieve it from anywhere in the game arena (ie. the screen) by pressing the fire button a second time. The arrow will actually hit things as it flies back to you, so it functions as a sort of boomerang. It’s strange and awkward at first, and it wasn’t very intuitive for me to aim it with the left analog stick.

The basic gameplay loop goes like this: Walk up to a door. Open the door. Inside, there’s a room and a boss. Fight the boss. Defeat the boss. Locate another door, and repeat the process. In other words, there’s nothing but boss fights in this game. No NPCs, no cut scenes, no exploration, no worldbuilding, no story. Just bosses. That’s all I saw in the first 45 minutes, at least.

You have the aforementioned one-use arrow/boomerang as your weapon to defeat these bosses. If you receive any damage whatsoever, you die and start again. It’s a lot harder than Dark Souls. For me, at least. Where are the people complaining about the lack of a difficulty setting for this game?

Anyway, I can understand why people would give it a “Souls-like” label. While the game doesn’t look or play anything like Souls, there are certain feelings and tactics that are very reminiscent of playing Souls. In Souls, when you approach a boss, there is a phase of observation and study to learn the boss’s attacks and patterns, and once you master that, you start to formulate a plan of attack and a strategy to defeat them. There’s almost a scientific trial-and-error process to fighting bosses in Souls games. It’s the same in Titan Souls.

The game is also Souls-like in the sense that every death is the result of a dumb mistake that you’ve made. Every attempt at a boss is a learning experience, and you go into the next attempt just a little smarter and wiser. Hopefully. Or else you mistime a button press and complain about how the game didn’t dodge when you thought it should have.

There is also the irritating gameplay mechanic of “running back to the boss.” In Titan Souls, you simply walk unopposed from the respawn point back to the boss room, which only takes a few seconds. But it’s a very irritating few seconds, because you have that time to sit and stew about what you did wrong the last time. “But I pressed the dodge button and I got killed anyway!” might be a common refrain during this time. In that sense, Titan Souls is definitely Souls-like.

So in those ways, I could see this as being “Souls-like.” But that’s about it. There are no weapons, no move sets, no smart enemy AIs, no brilliant level design. Just square rooms with bosses in them. 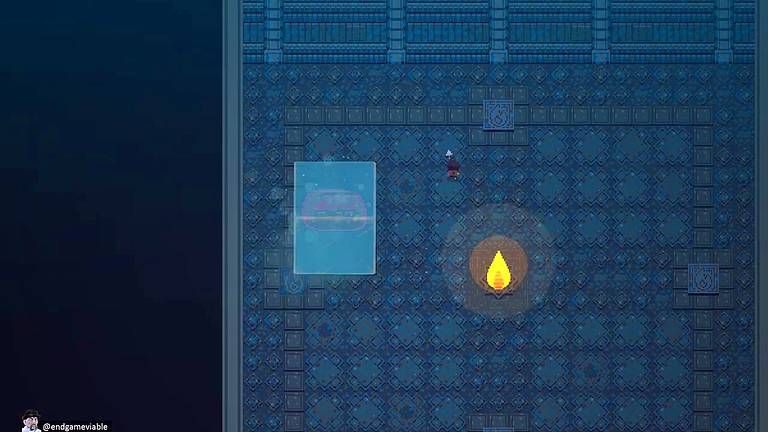 My third boss, the flying brain cube and platforms.
The game doesn’t tell you what the bosses are actually called.

Unfortunately fighting the bosses is the most stressful part of a Souls game, and it’s pretty aggravating in Titan Souls as well. Getting killed by a boss over and over isn’t as much fun as it sounds (ha!), especially when you die in seconds because all the boss has to do is touch a single pixel of your guy on the screen to kill him. If you don’t feel like you’re learning anything or making progress in a boss fight, it’s a slog.

And unlike a Souls game, there are no stories or mysteries or cut scenes or voice acting to incentivize you to push through the bosses to find out what’s beyond them. In fact, there’s nothing beyond them. Each boss fight room is entirely empty except for the boss. There isn’t even any boss loot. Your reward for defeating a boss in its room is … leaving to look for another boss.

I gave up on Titan Souls on the third boss because I couldn’t figure out how to beat it. (It was the one through the right-hand door, the cube with the brain in the middle and the four pressure plates.) I’m sure I could Google it, but a “true” Souls-like experience would be best without looking up the solutions.

I imagine if I had beaten that third boss, I would have unlocked the next stage of the game, which probably would have been more doors and more bosses.

Now that I think about this, Titan Souls is more of a puzzle game than a Souls-like game.

Will I play more? It’s conceivable. It’s not a large game so it’s easy to leave it installed. I could see playing 10 or 15 minutes at a time. It’s the kind of game that might work well to play while watching television that isn’t all that engaging, or listening to audiobooks or podcasts.

Stream Production Notes: Nothing much to report. No technical difficulties this time, thankfully. In fact, Titan Souls ran at my preferred full-screen resolution right out of the gate. A rare PC game that “just worked.”

Previously on the Steam Backlog Bonanza: Tree of Savior.