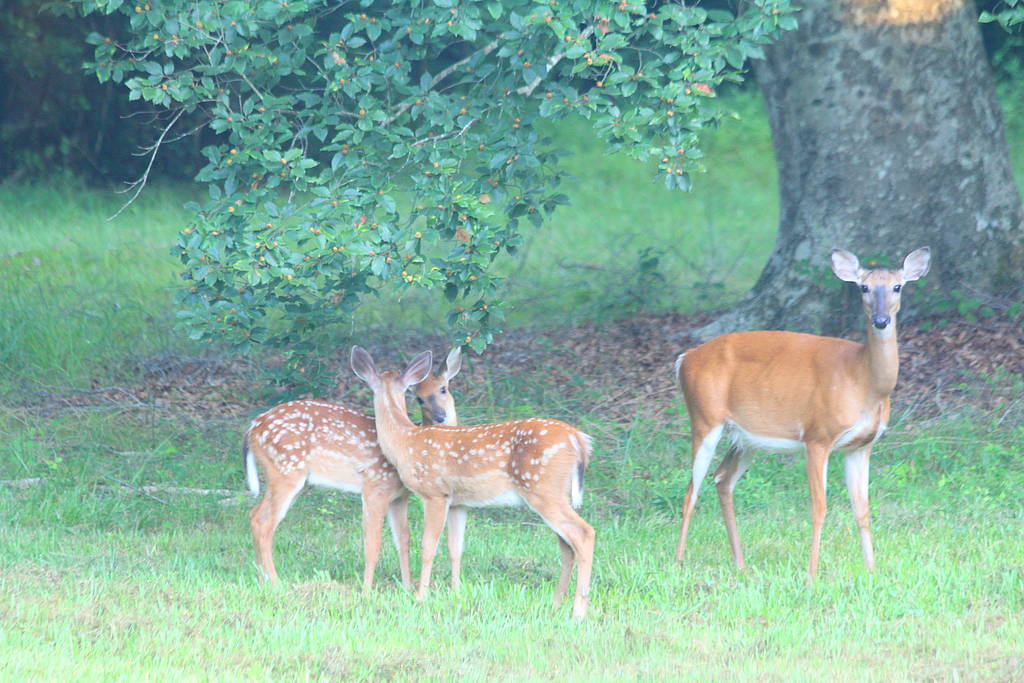 We interrupt this blog post creation for an unscheduled visit from some deer.

I live on a one-acre lot, but behind my house, there’s a 90-something-acre undeveloped lot of forest, so I see a lot of wildlife wandering around my back yard. Deer being one of the larger varieties of said wildlife. Also possum, foxes, feral cats, dogs, birds, wild turkeys, squirrels, snakes, spiders, dragonflies, toads, turtles, salamanders, etc. etc.

This morning as I was getting up, I noticed a return visitor: A doe and her two fawns. They first appeared back in June.

So I grabbed a few pictures this morning.

I have hundreds if not thousands of photos of deer in my back yard from the last four or five years. Thankfully the telephoto lens on my now-nearly-10-year-old DSLR camera still works even after my cat knocked it off a shelf earlier this year, though it now makes louder whirring noises when autofocusing than it used to.

I didn’t do any color correction on these photos, as you can plainly tell from the washed-out look that comes from taking a picture through a window. The deer always know when I’m standing there at the window taking pictures, incidentally. Mama doe always stares at me intently while I’m taking pictures.

P.S. I’ve realized that I haven’t done a single thing to mark or promote or point out that these are Blaugust posts in anyway, which is mostly a lack of attention to detail, but I don’t particularly want any prizes anyway, so I’m okay with forfeiting my place on the winner’s stand.