Similar to what I did with Stormblood, I wanted to write a brief high-level overview of the events of the Final Fantasy XIV Shadowbringers expansion story, so I’ll remember it later. 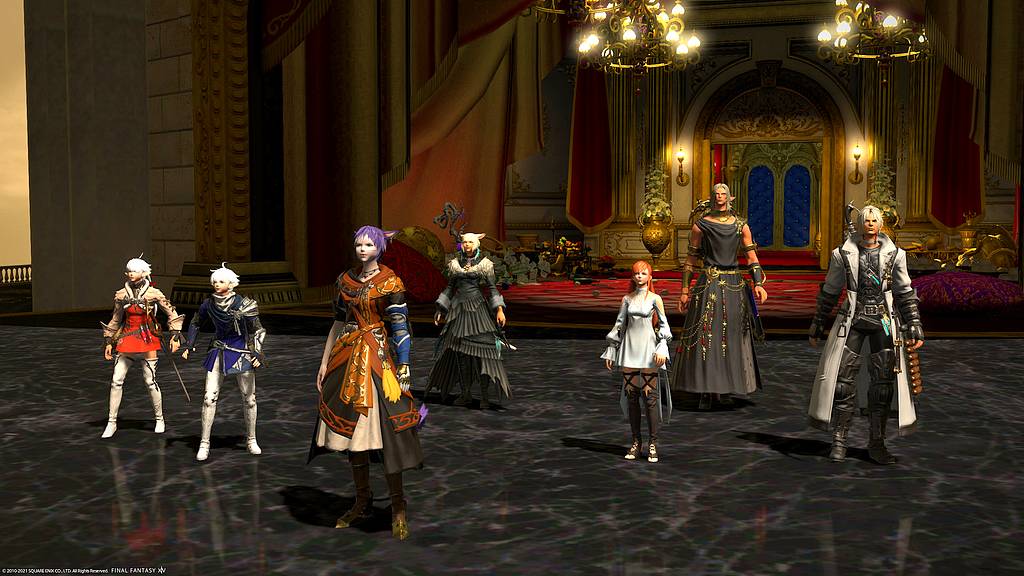 Similar to what I did with Stormblood, I wanted to write a brief high-level overview of the events of the Final Fantasy XIV Shadowbringers expansion story, so I’ll remember it later.

After watching all of the Scions collapse one by one, the Warrior of Light seeks answers at The Crystal Tower. There, we’re “called”–transported to a strange land, known as Norvrandt, or The First. We meet the Crystal Exarch, who summoned us, and, it turns out, all of the missing Scions (by mistake), to save Norvrandt from Sin Eaters.

Because time flows differently in The First, the Scions have been there for some years before we arrived. The Crystal Exarch called us to The First to defeat the Lightwardens, which have saturated the world with Light. We must “become The Warrior of Darkness” to defeat the Light. Cue the rock music.

We travel to Amh Arang to find Alisaie at the Inn At Journey’s Head, helping victims of Sin-Eater attacks. (At least I did; you may have visited Alphinaud first.)

Next we travel to Kholusia to find Alphinaud outside the opulent city of Eulmore, where the evil Lord Vauthry controls the Sin-Eaters and oppresses the poor and employs jongleurs and plays circus music.

Returning to The Crystarium, we defeat the Lightwarden of Lakeland, and restore night to the skies for the first time in a hundred years. The Crystal Exarch is pleased, because his plan is working.

Between adventures, we’re visited by the ghost of Ardbert, the former Warrior of Darkness, who has been wandering this land for a hundred years. It’s a long story. He’s been trying to save his home, The First, for a long, long time, but he was deceived by the Ascians into nearly destroying his home. Now he’s wondering why he’s still alive and what his purpose is.

We learn that the young girl Minfilia (it’s a long story), is held captive in Eulmore, and we mount a desperate assault to rescue her. Thancred arrives at the last minute to help.

The Scions escape to Il Mheg, the zone of the pixies, where we meet up with Urianger, who has a house there. With the help of the Mole People, we find and defeat another Lightwarden there.

Returning to the Crystarium, we find Emet-Selch, an Ascian (don’t misspell that!), waiting for us. Ascians are basically immortal troublemakers. He wants to know why we’re interfering with his plans, and starts tagging along to find out.

The Scions travel to the Rak’tika Greatwood to find Y’shtola, who is working with Runar and the people of the Night’s Blessed. With the help of the Bunny People, we find and defeat another Lightwarden.

Lord Vauthry isn’t happy about the Scions destroying all of his precious Lightwardens, so Eulmore attacks The Crystarium with a horde of Sin-Eaters! Many die. It’s the All-Is-Lost Moment.

The Scions don’t know where to go next. They need to find the rest of the Lightwardens but they are hidden.

They return to the desert so that Minfilia, the young girl, can seek the assistance of Minfilia, The Word of the Mother and The Oracle of Light (it’s a long story). She does, and absorbs the soul/spirit/something of Minfilia, and becomes Ryne. Minfilia is gone, once and for all (again).

Ryne, now with the power of The Oracle of Light, can find the remaining Lightwardens.

Ryne leads us to a Lightwarden in Amh Arang, and we defeat it. Alas, it turns out that we, in destroying each Lightwarden, are absorbing their Light instead of dispersing it, which is bad. It’s becoming too much to handle.

In a plot twist surprising no one, we return to Kholusia to find that Lord Vauthry himself is the final Lightwarden. He flies away and hides in a floating mountaintop, leaving the citizens of Eulmore quite confused.

The people of Kholusia band together to build a gigantic Talos golem to help the Scions reach the floating mountaintop. We defeat Lord Vauthry and free Kholusia from his evil grip, finishing off the final Lightwarden.

But the Light we’re absorbing from the defeated Lightwardens is too much for us and we collapse. The Crystal Exarch intended to absorb the Light and sacrifice himself to save us and The First, but Emet-Selch intervenes and shoots him in the back. Emet-Selch is disappointed in us and leaves, taking the wounded Crystal Exarch with him for his nefarious plans.

Only Ryne’s magic powers save us from certain doom. We’re weak and helpless and might turn into a Sin-Eater any moment if we overexert ourselves (except we’re at full power, in gaming terms).

We make our way underwater on a flying whale (it’s a long story) to The Tempest, where Emet-Selch has recreated the ancient Ascian city of Amourot.

We do some paperwork at various bureaucratic institutions in Amourot (it’s a long story), and learn about The Final Days and the long-dead Ascian race.

A final climactic battle with Emet-Selch ensues. We’re almost defeated, but we merge souls with the ghost of Ardbert, the True Warrior of Darkness, and with the help of the Scions, we defeat Emet-Selch and save The Crystal Exarch and The First.

Celebrations are held and the credits roll.