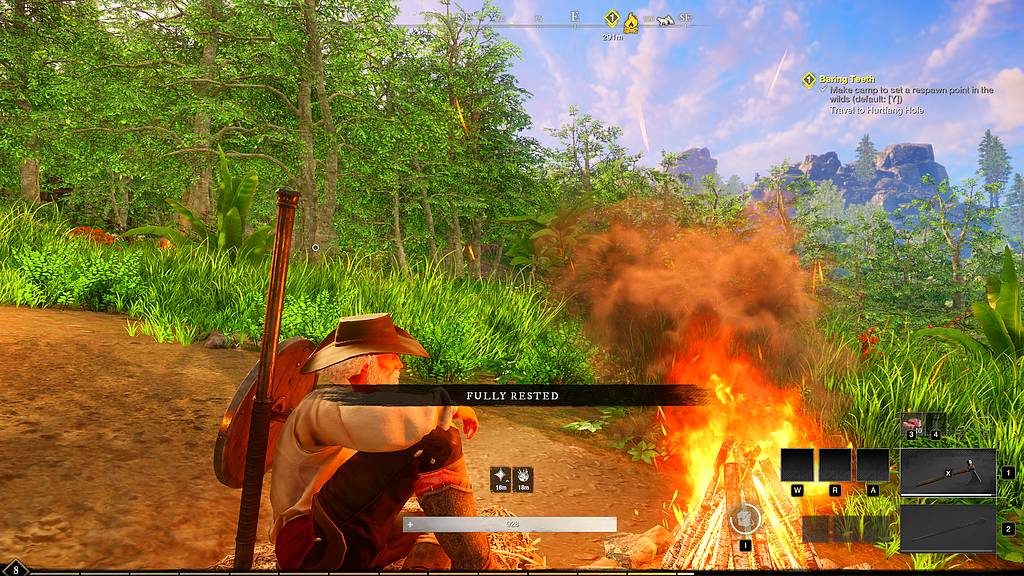 In short, I haven’t experienced much of the queue problems everyone else is having. It’s been a fairly normal MMO launch for me.

But then, I’m mostly a solo MMO player and have no need to coordinate and socialize with a bunch of people across the world. It seems Amazon didn’t put much thought or effort into those systems.

As a side note: That’s what Discord is for, isn’t it? Honestly I don’t even understand why they build social systems into games anymore, it just seems like a big waste of development resources. Just put a Discord hook in there. RIFT was one of the only MMORPGs I can remember to innovate with social media but nobody’s picked up the ball since then.

My experience was much the same as everyone else. Absurd queues, because for some reason they set the idle timeout to 30 minutes instead of 2 or 3 minutes. In any case, people quickly figured out that old trick of running up against a wall to stay online indefinitely.

But once logged in, the game ran perfectly for me, except for that very first session at 8 AM.

Bhagpuss mentioned the Charity Douglas NPC … I got that starting NPC too (somehow you get different starting NPCs depending on some formula I don’t understand; I’ve seen three different ones so far).

I’m almost 99.9% sure that voice actor is Kim Richards from High Rollers, which makes me wonder if they got all their voice actors from Twitch D&D shows as some sort of Amazon corporate synergy (or for a cheap source of “good enough” voice actors). There’s no information on the voice acting cast that I’ve seen. [UPDATE: Found it, though Kim Richards is not listed.]

I uploaded all the videos I recorded from my first day, where I wandered around practicing my Runar voice (an NPC in Final Fantasy XIV Shadowbringers) and wondering where to find the fun game everyone keeps talking about. I played one session in the morning, one session at noon, and a handful of sessions at night.

It took me close to an hour to get through a 40-person queue to log into my tiny backwater speck of a server Hanan Pacha (the Incan “heavenly underworld,” obviously the coolest-sounding server name in US East).

As for the game itself, I was fairly unimpressed. I didn’t get any further than I did in any of the betas, where I was similarly unimpressed. Little did I know, they didn’t put anything impressive in the beginning of the game, for reasons that I’m sure I wouldn’t understand. I got to level 9.

I logged in to play before work and had no queue at all.

I logged in to play after work and it took about 20 minutes to get through a 150-person queue (where I expected it to take hours… I had to idle for a long time until I was finished with work).

I heard some folks in the evening talking about a queue of thousands on Belghast’s Minda server, so I tried logging in with a character I made there, and the queue for me was about 50. I didn’t wait around to see how long it took. The whole queue thing seems pretty random. :shrug:

On my second day, I was still wondering where to find the awesome game everyone seems to like. I see little more than a minimum viable product full of half-finished features, where the main activity is chopping down trees and picking up rocks in a very generic-looking forest, followed by standing around a very overpopulated Hamlet full of players with terrible pun names that you can’t turn off. There’s no story to speak of, no lore to speak of, no characters to speak of, no quests to speak of. Just an empty wasteland of nothingness.

But at some point I joined the Covenent (one of the three factions, the one that forces their religion on people … with an axe), and suddenly I was given a quest to go somewhere and do something.

I mean, it was to kill 10 rats, and it was a lot of non-interactive empty terrain I had to cross to get there, but still, I got to leave the Hamlet and travel to a distant location and kill generic zombies to save their immortal souls.

Upon returning, I reached level 10 and suddenly I seemed to have even more options to go places and do things and talk to NPCs.

So in short, inexplicably, the first 9 levels of New World is utterly wasted time and in no way represents a game worth playing. The game doesn’t really start until level 10. Only then did I begin to see the edges of that game everyone was talking about. Maybe.

Then I got to go out to a quarry and kill more zombies (I think zombies are the only enemy in the game, besides boars and wolves), find a brooch, gather some honey, and destroy some Corruption nodes. Very exciting stuff that I would have thought I’d get to do in the first hour of the game, not the third or fourth hour.

Somewhere around this time I also learned that LALT + H is the mysteriously fixed hotkey to hide the UI.

Anyway I reached level 11 on the second day. Then I stood idle too long and was kicked. I decided to play Final Fantasy XIV instead of trying to log in again. FFXIV is a vastly superior MMORPG to New World, but I don’t really need to do anything there until Endwalker launches in November.

I logged in to play on Hanan Pacha before work, and as before, had no queue. I discovered that the Town Board quests are utterly pointless.

I got a quest to kill a bear, but it didn’t tell me where to find a bear.

I got a quest to make some linen, and wandered all over creation trying to find linen fibers, and found exactly two plants in a half hour, far short of the required number. (Meanwhile you can’t walk two steps without tripping over a million kinds of “bushes.”)

So there’s a horrible return on investment from those Town quests. A half hour of play and literally nothing gained. I will never return to the Town Board. Why is it even there? Maybe there’s a reason, but the game definitely doesn’t make it clear how it benefits me in any way. It probably unlocks something later. Maybe.

Who knows what exciting gameplay awaits in the evening of Day Three? Not me, because that’s in the future.

The big community news on the third morning is that apparently the grace period for this MMO launch is now over, because everyone on Twitter is warning people to stay away and announcing that they won’t play anymore until the server queues are resolved.

Everyone is worried that the sky is falling and the game is already dead and the very future of MMORPGs is in jeopardy again (a slight comedic exaggeration of actual worries). But yeah, people are pretty annoyed about the queues now.

I mean, Hanan Pacha works fairly well, all things considered. I almost posted yesterday that the meme of “MMO launches are always train wrecks” isn’t a thing anymore, but apparently it’s still a thing. It just takes a few days to gestate.

I suspect the issues vary widely depending on which server you’re on, and where you’re located geographically in relation to that server’s data center. I happen to live in the same state with Amazon’s N. Virginia data center, so that’s probably why I’m not seeing as many problems on US East.

It’s funny how queues are a bit of a dual-edged sword. On the first day of an MMO launch, queues probably create more of positive PR buzz, as everyone hears the news that there’s some hot new club everyone’s waiting in line to get into. So it probably helps a game a lot on the first day.

But on the second day and beyond, queues turn into a big PR problem because everyone seizes on the “oh no not another launch day disaster” meme. But it only really matters if a top-tier streamer has problems. Us peons complaining to our handful of followers don’t matter that much.

Anyway most of my curiosity about the game is already satisfied. If the game suddenly disappeared tomorrow I’d just shrug and move on to something else. There’s nothing to get invested in; no characters, no story, no stakes. Whatever story develops from this game will be based around real life guild or streamer drama.

I have zero interest in any of the territory control from either a PvE or PvP perspective, the game has done nothing to explain to me why controlling territory is beneficial to my character in any way, or why it should matter to me in the slightest what color the map regions are.

Still, it’s not terrible. MMOs have to start somewhere. It’s worth $40, I think.